The last year has put a spotlight on mental health, and startup Real is looking to shake up the space with a product that makes group therapy available on-demand.

Founded by CEO Ariela Safira, Real is inspired by a long-standing methodology in the world of mental health: Group therapy. AA, for instance, has been around for decades and proven to be incredibly effective for some. But that format isn’t as readily available across a variety of issues beyond the disease of addiction.

To deploy this service, Real has raised $10 million in Series A financing, led by Lightspeed Venture Partners with participation from existing and new investors, including Megan Rapinoe and Minnesota Vikings Linebacker Eric Kendricks.

Real employs full-time therapists to lead group therapy across a variety of issues, including exploration of sexuality, anxiety, managing anger with family members, and other real-world issues. With Real, users pay $28/month to have access to these pathways (as Real calls them), letting users watch these group therapy sessions on-demand and get journal prompts and other resources.

One of the benefits of this platform is that users can get more tactical advice on these things, rather than trying to explore the problems. They also feel less alone, as they see others are struggling with the same things.

Perhaps most importantly, Real allows users to tap into the conversations and therapy they need at the time they want it.

Safira explained that she might be deep in her thoughts and feelings on Wednesday at 11pm, but can’t get a one-on-one therapy session until 2pm on Monday. Her state may have changed. With Real, she can get online and access the right pathway in the moment.

Interestingly, Real’s research shows that most people doing one-on-one therapy said they went for general anxiety, relationship problems, and career advice. However, on Real, the top pathways are sexuality, motherhood, and intimacy. The conclusion is that the things people want to work on the most are not always the things they’re most comfortable digging into in a one-on-one setting.

By scaling group therapy sessions to an on-demand audience, Real has been able to bring the cost of this type of service way down, especially when compared to one-on-one therapy.

Real is the product of many years of work in the mental health space. While she was studying for her undergrad at Stanford, Safira’s friend attempted suicide. It was her first time confronting the mental health system and it made her wonder why the system was designed the way it was. She threw herself in.

“I spent two to three years working on how to redesign the mental health care system,” she said. “That entails, visiting and flying to rehab centers, therapy offices, architecture firms that have built those spaces to learn why we make the decisions in mental health care that we make. Things like is there research behind the bright white walls in inpatient mental health facilities, and if not, is that based on legal hurdles or financial hurdles? I really wanted to get into the foundation of how to build a system.” 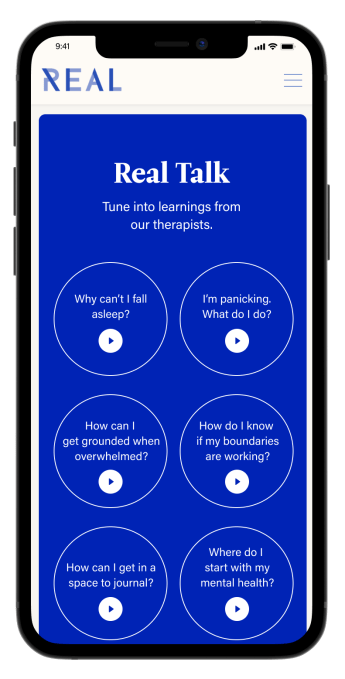 “[Ariela] looked at something that has been around for so long, therapies in the traditional sense, and flipped it on its head to break up the status quo, and I thought that was really interesting and innovative,” said Megan Rapinoe in an interview with TechCrunch. “There are obviously a lot of barriers to access mental health services, for a lot of different reasons. Hopefully, this platform can make it easier for people to get the help that they need.”

Rapinoe is but one of the big names invested in Real. She is joined by Gwyneth Paltrow and Eric Kendricks.

Kendricks explained that he had never been averse to therapy but that he learned a lot after meeting his now-fiance and hearing about her struggles and the struggles of her family, which has dealt with a variety of mental health issues.

“Everything was going was going well for me,” he said. “I was always playing well in the field, and financially, I’m making more money than when I was a kid. But I did have moments where I was questioning myself and in my head a lot and it’s kind of a weird feeling. I had to take a step back and I realized that I was going through a little bit of something. But based on the conversations I had with my fiance, I used my resources to to find the help that I needed and it was amazing.”

He explained that the shift in society’s mentality around mental health has paved the way for a product like Real, which is a more proactive and preventative approach to mental wellness.

But Real has also been able to react quickly to big events in our world. The company has launched a product called Real to the People, which offers free access to the platform during moments of crisis, including the COVID-19 pandemic, the murder of George Floyd, and most recently, the spike in anti-Asian hate crimes.

Nicole Quinn, partner at Lightspeed, explained that the firm has had an interest in the mental health space for a long time. In fact, LSVP is an investor in Calm.

“The ‘aha’ moment for me was when I looked at the disease of alcoholism,” said Quinn, who led the round in Calm. “You get to go to Alcoholics Anonymous, and you really benefit through having groups. Can we apply that same group method by scaling to other areas. We have a fundamental belief that yes, you can.”

Real has raised a total of $16 million since launch.