The competition for note-taking is as fierce as it has ever been with plenty of highly-valued productivity startups fighting for an audience it can potentially serve endless productivity offshoots. In the past year, Notion raised at a $2 billion valuation, Coda raised at $636 million, and Roam raised at $200 million.

A new competitor in the space is emerging out of stealth with fresh funding from Andreessen Horowitz. The free app, called Mem, is an early access platform dedicated to pushing users to quickly jot down their thoughts without focusing too heavily on the underlying organization of them. The startup’s founders have vast ambitions for what their platform could become down the road, tapping into further advances in machine learning and even AR.

“Really the differentiation is [information] that is summonable ubiquitously wherever you are,” Mem co-founder Kevin Moody tells TechCrunch. “So, in the near term, through your desktop app with Mem Spotlight as a heads-up display for wherever you are, in the medium term through an assistive mobile application, and then in the long term, imagine contact lenses that are overlaying useful content to you in the world.”

Moody and his co-founder Dennis Xu tell TechCrunch they’ve raised $5.6 million led by a16z with additional participation from their Cultural Leadership Fund, Will Smith’s dreamers.vc, Floodgate and Unusual Ventures. The round also was host to a handful of angel investors including Harry Stebbings, Julia Lipton, Niv Dror, Tony Liu, Rahul Vohra and Todd Goldberg, among others.

In its current iteration, Mem push users towards “lightweight organization” rather than clicking through folders and links to find the perfect place to nestle their thoughts. Users can quickly tag users or dedicated topics in their notes. The user workflow relies pretty heavily on search and chronological organization, presenting users with their most recently accessed notes. Users can also set reminders for certain notes, bringing a popular email framework to note-taking.

For users of stock apps like Apple Notes, these interface quirks may not sound very jarring, though the design is still a departure from apps like Notion and Airtable which have heavily focused on structure over immediacy. 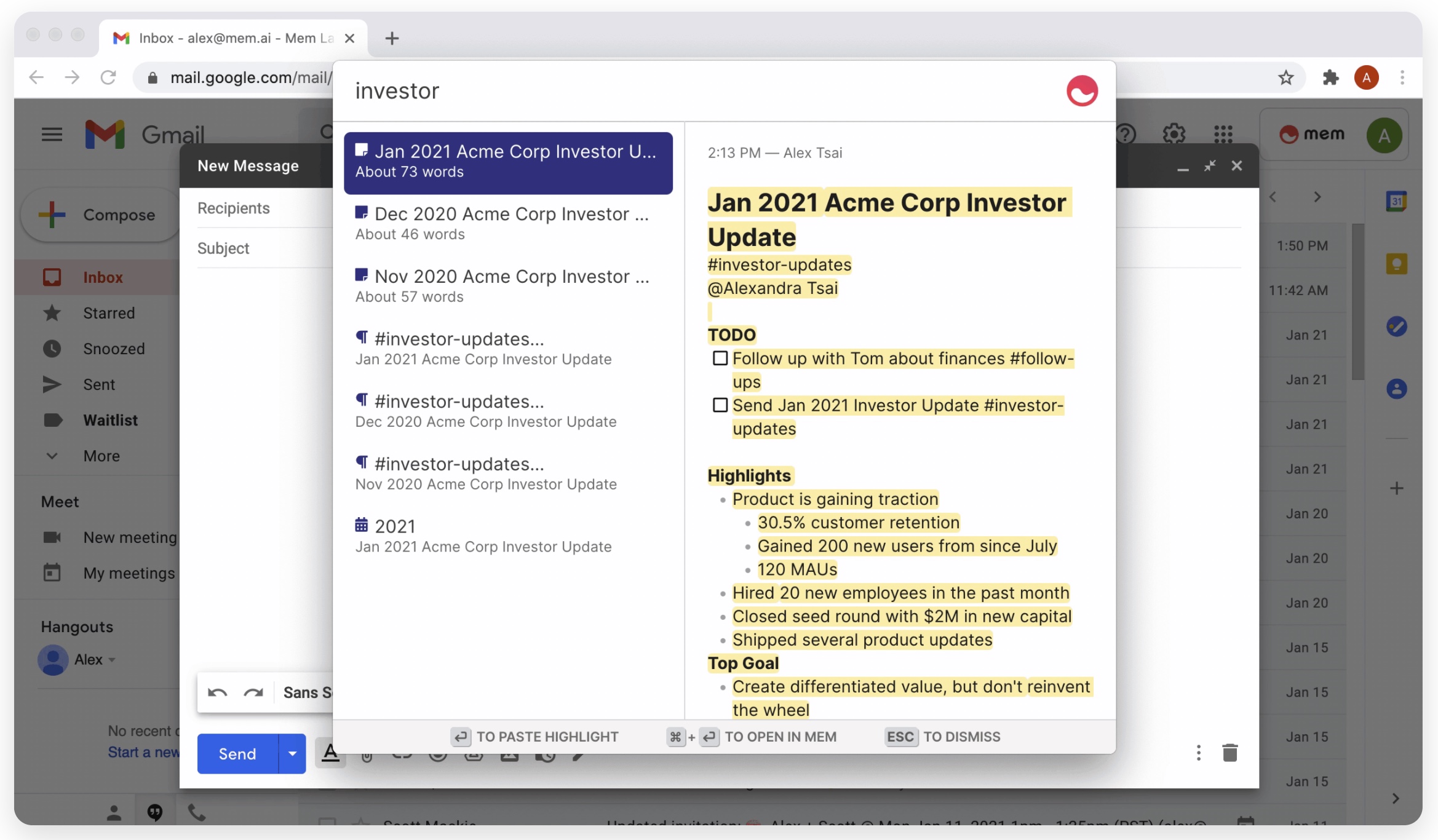 Perhaps Mem’s biggest shift is how users access the information they’ve dumped into the platform. The founders say they want to avoid their app being seen as a “destination,” instead hoping users rely heavily on a keyboard-shortcut-prompted overlay called Mem Spotlight that allows them to search out information that they may need for an email, presentation or text message. The broader hope of the founders and investors behind Mem is that the team can leverage the platform’s intelligence over time to better understand the data dump from your brain — and likely other information sources across your digital footprint — to know you better than any ad network or social media graph does.

“What would it mean to just capture passively your digital footprint and then make use of that as though it were structured,” Moody posits. “If we can actually have our own Mem modeling of all of these entities, whether it’s text, or maybe it’s contacts, the people that you know, or it’s the events that you’re going to and these different sources feed into Mem, what would it mean for Mem to be able to have a product that is the ‘you’ API?”

For now, the startup’s app isn’t quite as grandiose in scale as what the founders may see in its future, but as Mem continues to onboard early users from its waitlist and add to its desktop functionality, the company is driving towards a platform they hope feels more instrumental to how its users “remember” information.