StockX’s mission is “to provide access to the world’s most coveted items in the smartest way possible.” It says it right on the website, and it’s incontestable that the infinite data StockX makes transparent to anyone for free allows for smart participation in the business of sneakers.

But, smartest participation by whom?

As the business of sneakers commoditized alongside the boom of social media, plenty of the culture’s stories went largely overlooked by hype-pedaling media outlets and social media algorithms in addition to the influx of people with little familiarity or exposure to sneaker culture.

We often see “access” leveraged as marketing jargon, or the concept of democratization applied to opening up once exclusive spaces, which have often excluded marginalized communities. It’s become trendy to advertise the concepts of representation and inclusivity without actually doing the work internally: Adidas’ campaign imagery featuring a diverse set of models was released at the same time the company was under fire for overt racism and discriminatory hiring practices.

“Smartest” could be exchanged for “simplest” or at least used in tandem for a more accurate description. There’s no need to be educated on the shoes’ functionality, what replicas may look like, or even the story behind them or their history of releases and rereleases. StockX’s data offers education on the market. Access is granted to any person to easily make a financially smart purchase as long as they have an internet connection and the funds.

While StockX’s idea of access does circumvent gatekeeping and the backdoor deals of the past to an extent, it has come at the cost of having access taken from vibrant regions, brick-and-mortar stores and small businesses to those with more capital. In short, the access afforded to the most coveted items is a premium pass rather than democratization.

Andrew Zachary decided to sell off his sneaker collection around 2011 while he was in college. At the time, eBay was the best option, and he had to do quite a bit of legwork to price his pairs without any centralized data on the secondary sneaker market.

“I would have to go research the shoe on eBay to see how much people wanted for it and see what the shoe sold for by going through all of the closed auctions, and that’s how I generated the price. StockX definitely makes it a lot easier.”

The now 27-year-old, Chicago-based reseller still primarily operates on eBay because of the years he put into building his seller reputation on the platform. “If I’m looking to sell something on eBay, I go over to StockX, check the market price and list mine within that range.”

Although he never buys on StockX — he doesn’t want to pay retail nor depend on the company’s authentication services — Zachary recognizes the value the platform offers him. “Before [StockX], sneaker reselling was really like the Wild West. People would charge whatever they want and there was no reference point.” Looking back, he says, “If I was negotiating with someone and looking to buy a pair of shoes that they wanted $450 for, back in the day I couldn’t go to StockX and say, ‘Well, they have it for $350.’”

On the other hand, he has used StockX to sell on occasion. When he wants to offload a pair of shoes quickly, StockX’s model of users listing their bids (buyers) and their asks (sellers) enables speed. The buyers are essentially there waiting to be chosen. “It’s one click and right out the door.” 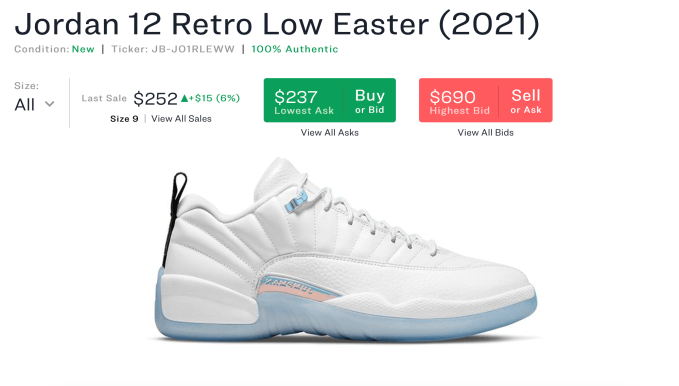 StockX’s interface allows for extremely easy one-click buying and selling of sneakers, such as this Jordan 12 Retro Low Easter (2021).

Despite recognizing the obvious opportunities the growth of the business of sneakers has afforded him, Zachary, like many other enthusiasts who have been into sneakers well before StockX, expressed the negative implications of its dominance in the market. “Because StockX made it so easy to resell shoes, anyone can do it. You don’t have to have any interest in sneakers. You can look up that shoe on StockX, see its resale value [and] go after that shoe on release day. You could have no idea what it really is or anything about it,” he laments.

The option to buy or sell in one click plus the combination of authentication, real-time pricing, data transparency as well as transaction anonymity affords a low-risk, easy entry point into the secondary sneaker market that did not exist pre-StockX. Yet, popularizing the sneaker space and enabling little to no effort for access also dilutes the culture of sneakers.

In 2019, Business Insider profiled a 15-year-old who financed his sneaker-selling business with the money he made doing yard work. He’s since quit playing sports to focus on school and building his business. He raked in six figures last year.

In the story, he said, “Everyone wants shoes, and there’s always someone who will spend an absurd amount, so it’s just about getting those pairs and building the right connections and understanding the market.” He plans on netting enough savings to eventually transfer his network and financial skills to real estate.

Such seemingly feel-good tales of young entrepreneurship — the new paper route, if you will — are rife and have also fueled scandal in the industry. Nineteen-year-old Joe Hebert built a $200,000-monthly-revenue sneaker-reselling business, even hitting sales of $600,000 in May of 2020, as described in a profile by Bloomberg Businessweek. All of the math in the Bloomberg story was impressive until it was revealed Hebert was leveraging access to discounted shoes via his mother Ann Hebert, who had a 25-year tenure with Nike and was most recently vice president and general manager of Nike North America. Industry critics also questioned whether her senior position offered her son easier access to limited-edition products, and her Nike affiliation went largely without consequence until the story was published. She stepped down from her position in the resulting furor.