Woody Sears has long been interested in storytelling. After spending several years in sales after nabbing an MBA from Pepperdine — and following the debut in 2007 of the first iPhone — he founded a storytelling app called Zuuka that built up a library of narrated and illustrated kids’ books for the iPhone and iPad.

Sears later sold that company to a small New York-based outfit called Cupcake Digital. But Sears, who is based in Santa Barbara, Calif., isn’t done with stories yet. Instead, he just raised $1.6 million in seed funding for his second and newest storytelling startup, HearHere, a subscription-based audio road-trip app that, with users’ permission, pushes information to them as they’re driving, giving them informational tidbits in three- to five-minute-long segments about their surroundings, including points of interest they might not have been aware of at all.

The idea is to surface the unknown or forgotten history of regions, which makes sense in a world where more people have returned to road trips and parents have grown desperate to pull their kids’ attention away from TikTok. In fact, Sears’s neighbor, Kevin Costner, liked the idea so much that he recently joined its five-person team as a cofounder and narrator and investor, along with Snap Inc., the law firm Cooley, Camping World CEO and reality TV star Marcus Lemonis, AAA, and numerous other individual investors, including from NextGen Venture Partners.

Because we, too, like history and road trips (and okay, fine, Kevin Costner), we talk with Sears and Costner earlier today to learn why they think they’ll succeed with HearHere when other content-rich geo-location based apps have fallen short of meaningful adoption.

Excerpts from that chat follow, edited lightly for length.

TC: You’re creating an audio map of the U.S., so how many stories do you have banked as we speak?

WS: We’re up to 5,500 stories across 22 states, and we’ll be nationwide by summer. The mission is to connect people to the places that they’re traveling through, lending people stories about the history, the natural wonders, and the colorful characters who’ve lived in that area. We also do stories about sports and music and provide local insights.

TC: That’s a lot of content to gather up, edit down, then record. What does the process look like?

WS: At the end of the day, the content is king, and we take great care with these stories, producing them with a team of 22, researchers, writers, editors and narrators, most whom come from a travel journalism background. We really feel like we get the best end result through that team approach.

TC: Is there an AI component or will there be?

WS: We more see this as augmented reality in that these stories really do overlay the landscape and give you a different perspective while traveling. But AI and machine learning are things that we’ll incorporate as we start to move into foreign languages and better tailor the content for the end user.

TC: How do you prioritize which stories to tell as you’re building up this content library?

WS: The major historical markers are a big inspiration, but we’re looking for those lesser-known gems, too, and we look at travel patterns — the way that people move when they’re on leisure trips, meaning what interstate highways they’re taking and which scenic routes are most popular.

TC: How does the subscription piece work?

WS: You get five free free stories each month; for unlimited streaming, it’s $35.99 per year.

TC: Kevin, you must be approached a lot with startup ideas and investment opportunities. Why get so involved with this one?

KC: Obviously I’m story-oriented; that doesn’t come as a shock to anybody. But you’re right, a lot of ideas come to me.

Hearhere came through my wife, who said that Woody had something he wanted to talk about, and as she explained it to me, I got it, you know? That’s the shiny thing for me, storytelling and having the ability for a good story to come out, especially when it comes to our country.

So we had this meeting and he explained the concept to me, which is kind of equal to what I’d already been doing my whole life, which is stopping at the bronze plaques all over the country and reading about their historical significance —  those [moments] that kind of interrupt everybody’s trip except mine. [Laughs.] You know, [it’s] getting out and stretching my legs and reading a little history and dreaming while the rest of the people in the car are kind of moaning because we stopped our progress.

This is an extension of that for me, without getting out of the car, and with stories that can evolve and perhaps get longer. And I can become more involved in what I was driving past and the people in the car can maybe sense what it was that interested me enough to stop. 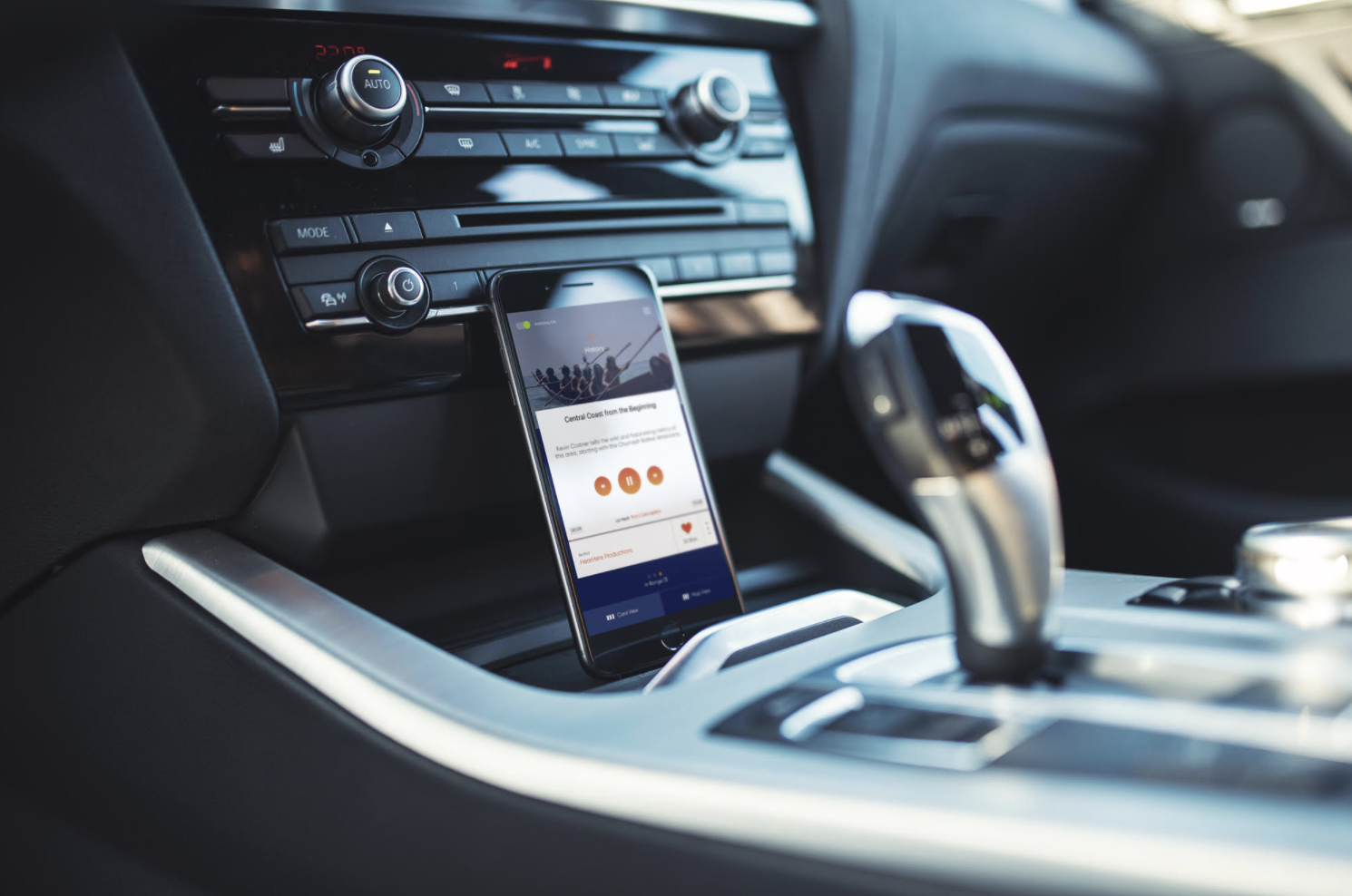 KC: Hearhere is a lot more than history, but for me, it was the history [that I found so compelling]. And it’s how the foundation was set for me to become more involved in the company and understand it a lot better and then become somebody who wanted to be a part of the founding of it.

TC: AAA and Camping World are among the company’s strategic investors. How might they promote the app and what other partnerships have you struck to get Hearhere in front of people at the right time?

WS: Camping World also owns Good Sam Club, which is the largest organization of RV owners in the world, and AAA is a giant with 57 million members in the US, and they all see this as a way to fulfill something they’re aren’t currently doing for their audience; it’s making that bridge to digital, and we’re really excited to get this in front of their members and customers.

We also have partnerships with [the RV marketplaces] Outdoorsy and RVshare [and the RV rental and sales company] Cruise America. It’s a very hot market.

TC: There have been similar ideas. Caterina Fake’s Findery was an early app that aimed to help users discover much more about locations. Detour, a startup that provided walking audio tours of cities that was founded by Groupon cofounder Andrew Mason, seemed interesting but failed to take off with users. What makes you think this startup will click?

WS: I loved Detour. I ate up both of those.

I guess where I think [Detour] missed product market fit was the number of scenarios where you could use it and also, it was competing for people’s time. We chose to start with road trips because you have a captive audience; there’s only so much you can do when you’re driving in the car, unlike when you’re in a city, where there are all kind of options to explore its history, either through physical books or tour guides, and you had to carve out two hours of your time, and it’s easy to get distracted while you’re walking around.

We want to capture the places that are along the journey and lesser known and more untold and where people have the space to engage in it. Starting as short form helps. It’s also on-demand, so you don’t have to follow a pre-designated route. We’re not taking you on a specific tour, where you have to turn left or turn right.  We’re going to surface stories for you no matter what route you take.