While several tech companies are opting to delay their IPOs in the face of less-than-enthusiastic market demand for their shares, real estate tech company Compass forged ahead and went public today. After pricing its shares at $18 apiece last night, the low end of a lowered IPO price range, Compass shares closed the day up just under 12% at $20.15 apiece.

TechCrunch caught up with Compass CEO and founder Robert Reffkin to chat about his company’s debut in the market’s suddenly choppy waters for tech and tech-enabled debuts.

Regarding whether Compass is a tech company or a real estate brokerage, Reffkin — who raised the comparison himself — used the opportunity to note that companies like Amazon or Tesla aren’t only one thing. Amazon is a logistics company, an e-commerce company, a cloud-computing business and a media concern all at the same time. Price that.

The argument was good enough for Compass to sell 25 million shares — a lowered amount — at its IPO price for a gross worth $450 million. That, the CEO said, was his company’s goal for its public offering.

Sparing TechCrunch the usual CEO line about an IPO not being a destination but merely one stop on a longer journey at that juncture, Reffkin instead argued that putting nine figures of capital into his company was his objective, not a particular price or resulting valuation.

That might sound simple, but as Kaltura and Intermedia Cloud Communications have pushed their IPOs back, it’s a bit gutsy. Still, if financing was the key objective, Compass did succeed in its debut. And it was even rewarded with a neat little bump in value during its first day’s trading.

Reffkin did confirm to TechCrunch what we’ve been reporting lately, namely that the IPO market has changed for the worse in recent weeks. He described it as “challenging.”

So why go public now when there is so much capital available for private companies?

Reffkin cited a few numbers, but centered his view around having what he construes as the “right team” and the “right results.” We’ll get a bit more on the latter when Compass reports its first set of public earnings.

For now, it’s a company that braved stormier seas than we might have expected to see so soon after a blistering first few months of the year for IPOs.

And because I would also bring her along if I ever took a company public, here’s the company’s founder and CEO with his mother: 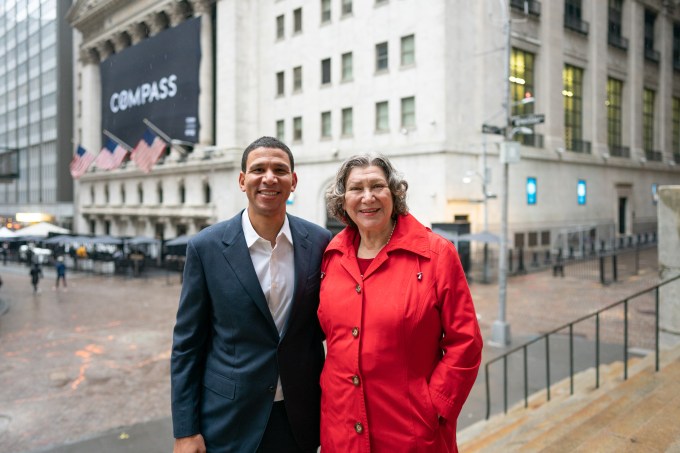