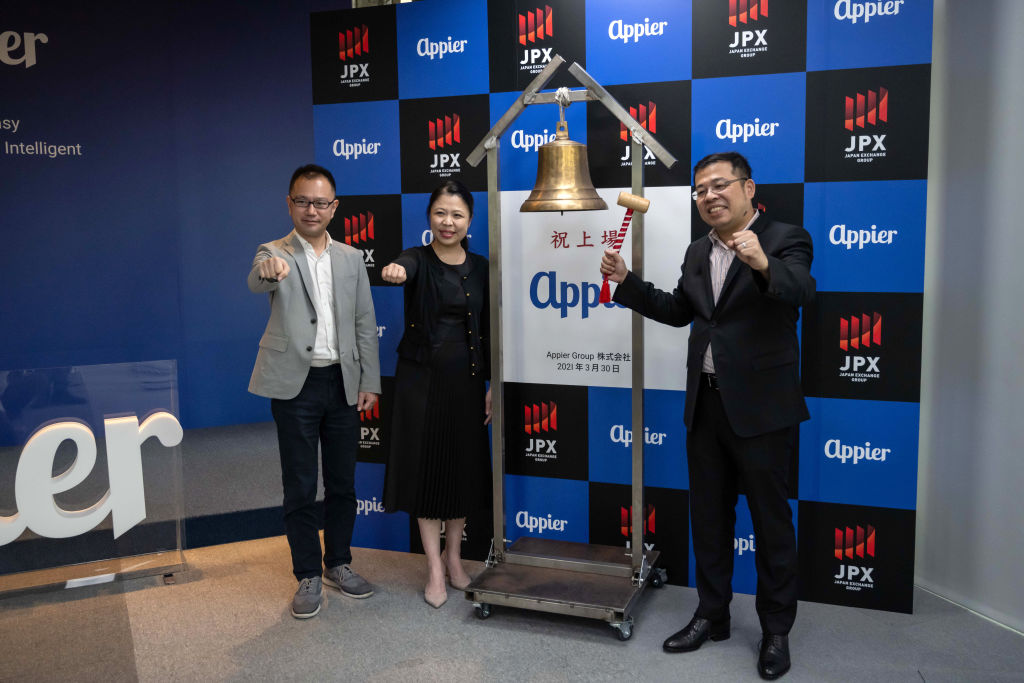 Chih-Han Yu, chief executive officer and co-founder of Appier Group Inc., right, holds a hammer next to a bell during an event marking the listing of the company on the Tokyo Stock Exchange, at the company’s office in Taipei, Taiwan on Tuesday, March 30, 2021. Photographer: Billy H.C. Kwok/Bloomberg via Getty Images

Appier’s initial public offering on the Tokyo Stock Exchange yesterday was a milestone not only for the company, but also Sequoia Capital India, one of its earliest investors. Founded in Taiwan, Appier was the fund’s first investment outside of India, and is now also the first company in its portfolio outside of India to go public. In an interview with TechCrunch, Sequoia Capital managing director Abheek Anand talked about what drew the firm to Appier, which develops AI-based marketing software.

Before shifting its focus to marketing, Appier’s founders—chief executive officer Chih-Han Yu, chief operating officer Winnie Lee and chief technology officer Joe Su—worked on a startup called Plaxie to develop AI-powered gaming engines. Yu and Su came up with the idea when they were both graduate students at Harvard, but found there was little demand at the time. Anand met them in 2013, soon after their pivot to big data and marketing, and Sequoia Capital India invested in Appier’s Series A a few months later.

“It’s easy to say in retrospect what worked and what didn’t work. What really stands out without trying to write revisionist history is that this was just an incredibly smart team,” said Anand. “They had probably the most technical core DNA of any Series A company that we’ve met in years, I would argue.” Yu holds a PhD in computer science from Harvard, Wu earned a PhD in immunology at Washington University in St. Louis and Su has a M.S. in computer science from Harvard. The company also filled its team with AI and machine learning researchers from top universities in Taiwan and the United States.

At the time, Sequoia Capital “had a broad thesis that there would be adoption of AI in enterprises,” Anand said. “What we believed was there were a bunch of people going after that problem, but they were trying to solve business problems without necessarily having the technical depth to do it.” Appier stood out because they “were swinging at it from the other end, where they had an enormous amount of technical expertise.”

Since Appier’s launch in 2012, more companies have emerged that use machine learning and big data to help companies automate marketing decisions and create online campaigns. Anand said one of the reasons Appier, which now operates in 14 markets across the Asia-Pacific region, remains competitive is its strategy of cross-selling new products and focusing on specific use cases instead of building a general purpose platform.

Appier’s core product is a cross-platform advertising engine called CrossX that focuses on user acquisition. Then it has products that address other parts of their customers’ value chain: AiDeal to help companies send coupons to the customers who are most likely to use them; user engagement platform AIQUA; and AIXON, a data science platform that uses AI models to predict customer actions, including the likelihood of repeat purchases.

“I think the number one thing that the company has spent a lot of time on is focusing on efficiency,” said Anand. “Customers have tons of data, both external and first-party, that they’re processing to drive business outcomes. It’s a very hard technical problem. Appier starts with a solution that is relatively easy to break into a customer, and then builds deeper and deeper solutions for those customers.”

Appier’s listing is also noteworthy because it marks the first time a company from Taiwan has listed in Japan since Trend Micro’s IPO in 1998. Japan is one of Appier’s biggest markets (customers there include Rakuten, Toyota and Shiseido), making the Tokyo Stock Exchange a natural fit, Anand said, even though most of Sequoia Capital India’s portfolio companies list in India or the United States.

The Tokyo Stock Exchange also stood out because of its retail investor participation, liquidity and total volume. Some of Appier’s other core investors, including JAFCO Asia and SoftBank Group Corp., are also based in Japan. But though it has almost $30 billion in average trading volume, the vast majority of listings are domestic companies. In a recent report, Nikkei Asia cited a higher corporate tax rate and lack of potential underwriters, especially for smaller listings, as a potential obstacles for foreign companies.

But Appier’s debut may lead the way for other Asian startups to chose the Tokyo Stock Exchange, said Anand. “Getting ready for the Japanese exchange meant having the right accounting practices, the right reporting, a whole bunch of compliance stuff. It was a long process. In some ways we were leading the charge for external companies to get there, and I’m sure over time it will keep getting easier and easier.”