The pandemic’s remarkable impact on the app industry has not slowed down in 2021. In fact, consumer spending in apps has hit a new record in the first quarter of this year, a new report from App Annie indicates. The firm says consumers in Q1 2021 spent $32 billion on apps across both iOS and Google Play, up 40% year-over-year from Q1 2020. It’s the largest-ever quarter on record, App Annie also notes. 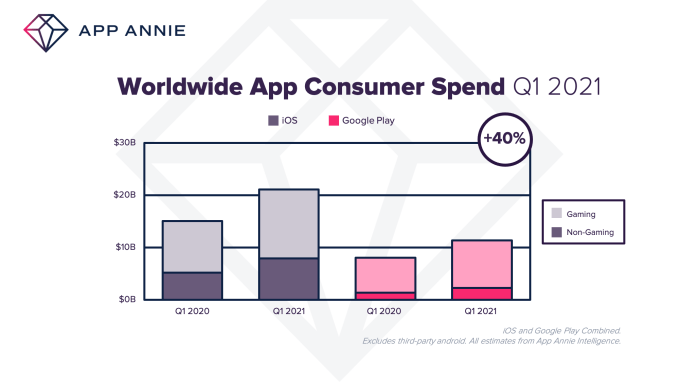 These trends have continued into 2021, it seems, with mobile consumers spending roughly $9 billion more in Q1 2021 compared with Q1 2020. Although iOS saw larger consumer spend than Android in the quarter — $21 billion vs. $11 billion, respectively — both stores grew by the same percentage, 40%.

But the types of apps driving spending were slightly different from store to store.

By downloads, the categories were different between the stores, as well.

On Google Play, Social, Tools, and Fiance saw the biggest download growth in Q1, while Games, Finance and Social Networking drove download growth for iOS. Also on Google Play, other top categories included Weather (40%) and Dating (35%), while iOS saw Health and Fitness app downloads grow by a notable 25% — likely a perfect storm as New Year’s Resolutions combined with continued stay-at-measures that encouraged users to find new ways to stay fit without going to a gym. 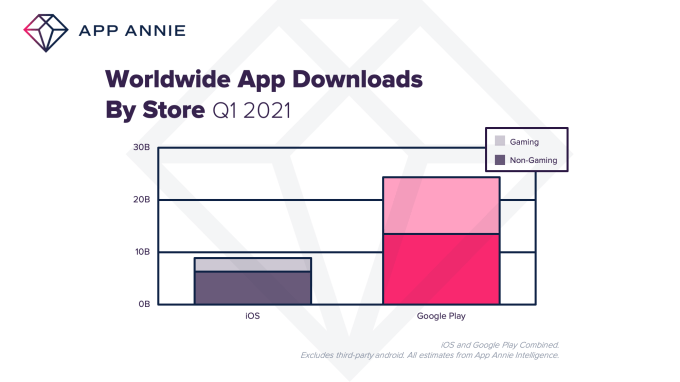 The top apps in the quarter remained fairly consistent, however. TikTok beat Facebook, in terms of downloads, and was followed by Instagram, Telegram, WhatsApp and Zoom. But the short-form video app only made it to No. 2 in terms of consumer spend, with YouTube snagging the top spot. Tinder, Disney+, Tencent Video, and others followed. (Netflix has dropped off this chart as it now directs new users to sign up directly, rather than through in-app purchases). 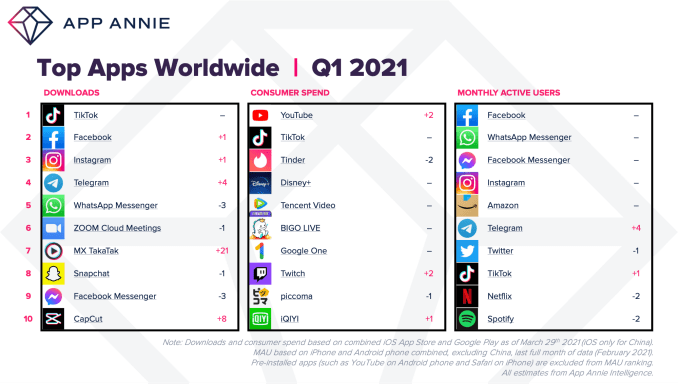 Though Facebook’s apps have fallen behind TikTok by downloads, its apps — including Facebook, WhatsApp, Messenger and Instagram — still led the market in terms monthly active users (MAUs) in the quarter. TikTok, meanwhile, ranked No. 8 by this metric.

Up-and-comers in the quarter included privacy-focused messaging app Signal, which saw the strongest growth in the quarter by both downloads and MAUs — a calculation that App Annie calls “breakout apps.”  Telegram closely followed, as users bailed from mainstream social after the Capitol riot. Another “breakout” app was MX TakaTak, which is filling the hole in the market for short-form video that resulted from India’s ban  of TikTok. 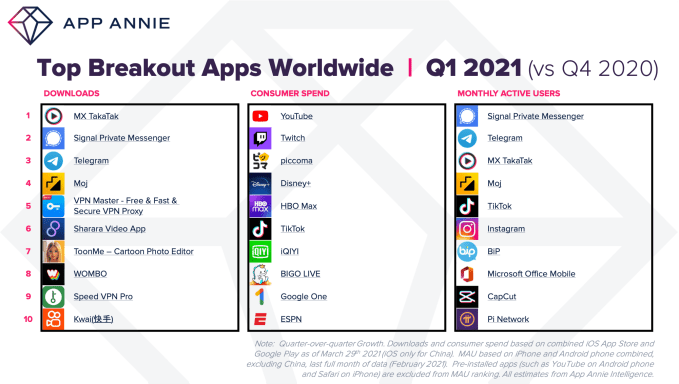 Gaming, meanwhile, drove a majority of the quarter’s spending, as usual, accounting for $22 billion of the spend — $13 billion on iOS (up 30% year-over-year) and $9 billion on Android (up 35%). Gamers downloaded about a billion titles per week, up 15% year-over-year from 2020.

Among Us! dropped to No. 2 in the quarter by downloads, replaced by Join Clash 3D, while DOP 2: Delete One Part jumped 308 places to reach No. 3. 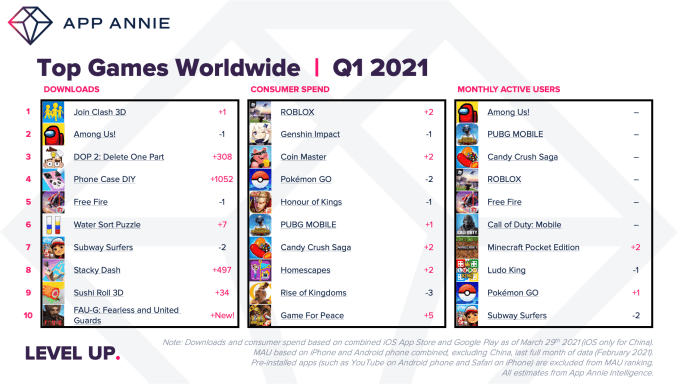 Roblox led by consumer spend, followed by Genshin Impact, Coin Master, Pokemon Go and others. And although Among Us! dropped on the charts by downloads, it remained No. 1 by monthly active users in the quarter, followed by PUBG Mobile, Candy Crush Saga, Roblox and others.

App Annie notes that the pandemic also accelerated the mobile gaming market, with game downloads outpacing overall downloads by 2.5x in 2020. It predicts that mobile gaming will reach  $120 billion in consumer spending this year, or 1.5x all other gaming formats combined.