Two-and-a-half years later, the Nest Home Hub remains one of my favorite smart screens on the market. Maybe that’s a commentary on the rate of improvement in the category, or maybe Google just got things pretty right the first time out. It remains one of the best-looking products on the market, built from solid but understated material. The size is right and Google clearly put a lot of thought into the functionality.

Of course, these consumer electronics have spent a few decades training us to expect big, annual updates to product categories (gotta keep that demand up). By that measure, the second-gen device is something of a disappointment. There’s not really a lot new here. The product now does sleep tracking and the speaker’s bass is a bit more full. And that’s honestly pretty much it.

Perhaps the most fascinating thing about the new version is how Google’s engineers worked within their own self-imposed limitations. I recall very distinctly seeing original Google Home Hub at a pre-release event and asking the company about the decision not to include a camera. Surely companies like Google and Amazon were committed to collecting as much information as possible on devices like these. 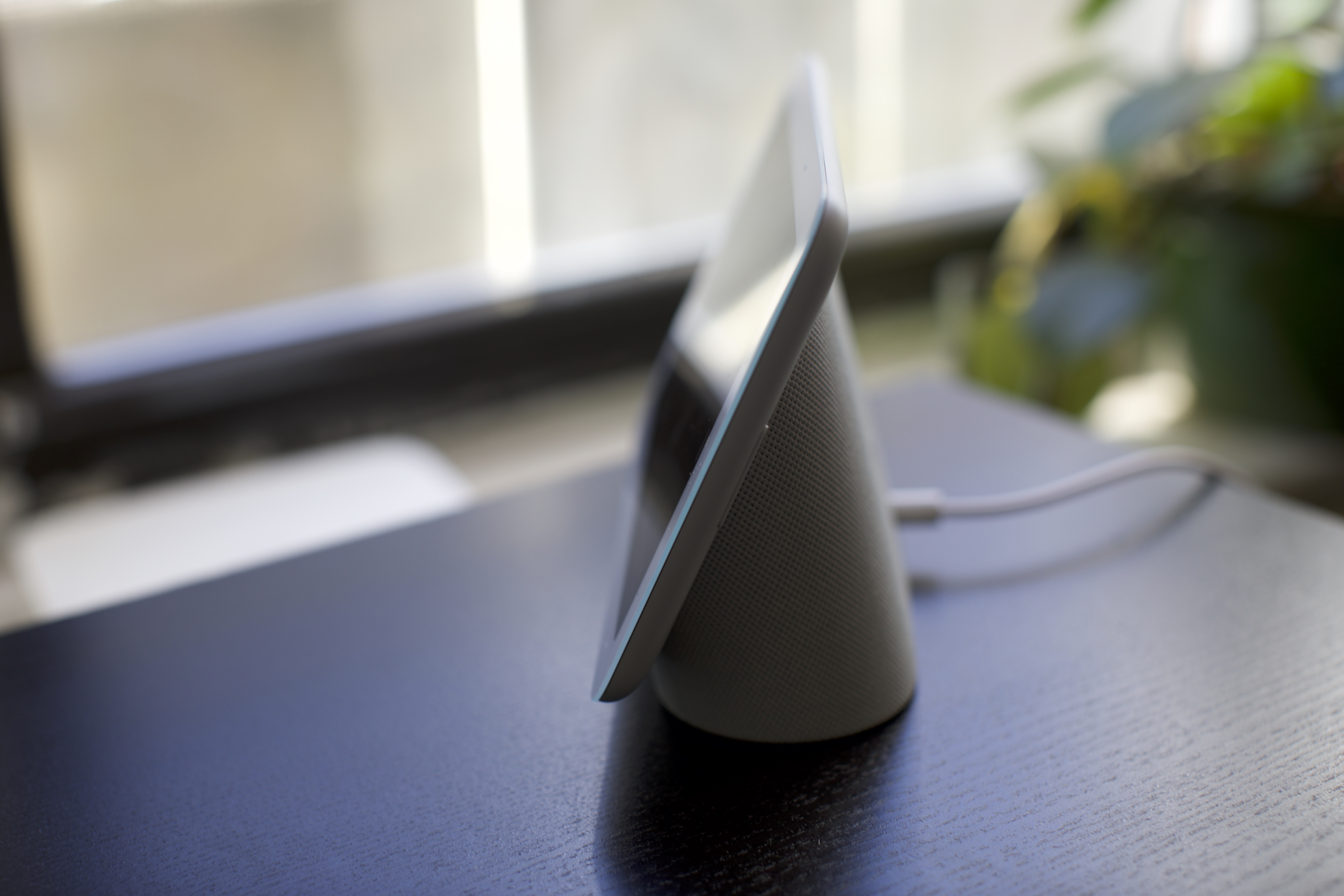 I gave the company kudos at the time for keeping the camera off the device — and I’m happy to say it continued to do so with gen 2 (of course, that was made easier with the subsequent release of the camera-sporting Nest Hub Max). And I have to say, having tested the new Echo Hub, which actually physically moves to follow you around the room, only cemented my appreciation of the intentional omission.

That decision was, no doubt, an integral part of why the Nest Hub has become a popular bedside device. Most of us don’t want a camera trained on us while we sleep and do…all of the other things people do in bed (eat crackers, watch scary movies, etc.).

Designing a second-generation version of what has become a popular bedside product made sleep tracking a no brainer. But there’s a problem: A camera seems like a pretty obvious way to do sleep tracking. But adding a camera would almost certainly make people less inclined to invite the product into their bedrooms. So, what do you do? If you’re lucky, you find a technology lying around that some company spent a bunch of money on, but ultimately had no idea what to do with.

So, what are the odds of something like that happening? If you’re Google, surprisingly high, it turns out.

Project Soli is one of those weird Google anomalies. It was a cool technology in search of a problem. The initial problem the team designated was, I suppose, that we touch our touchscreens too much. So it built the tech into the Pixel 4, allowing users to interact with a bespoke Pokémon game and a few other things. By the time the Pixel 5 rolled around, the technology was basically forgotten. 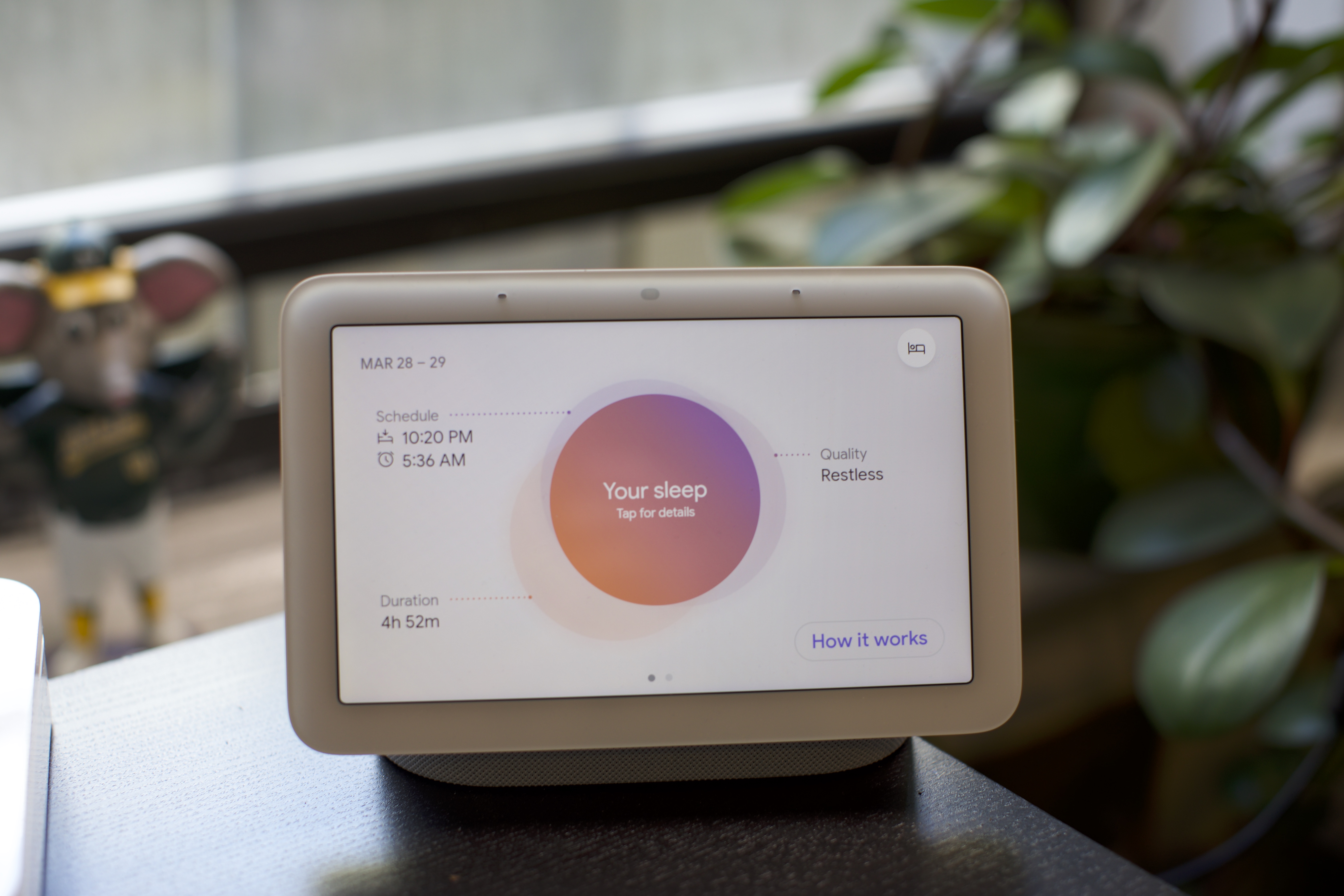 On the face of it, camera-free sleep tracking is a much more logical implementation of the Soli tech (assuming you can get around the initial strangeness of having essentially miniature radar in the electronic device sitting next to your bed). Here’s the breakdown from Google’s product page:

Sleep Sensing uses Motion Sense to track the sleep of the person closest to the display. With a low-energy radar, Motion Sense detects movement and breathing. Other sensors in Nest Hub detect sounds like snoring and coughing, and environmental factors like light and temperature in the room. That’s how Sleep Sensing determines not just when you went to bed and how long you slept, but also the quality of your sleep.

Certainly the inclusion of sleep tracking doesn’t make the product unique among consumer electronics. It seems like every company is racing to get into sleep — understandably so. Most of us aren’t getting anywhere near enough — a trend that dates back well before COVID-19 made insomniacs out of many of us. What makes the product relatively unique, however, is that it promises to do so without making contact with either you or the bed.

As someone who has tested dozens of fitness trackers and smartwatches over the years, I can attest that sleeping with a wearable around your wrist kind of sucks. I mean, I have enough trouble getting to sleep without one on (if I didn’t, I probably wouldn’t be that interested in sleep tracking in the first place).

For my money, if you’re looking for a pure sleep tracker, I would however, take a look at something like Withings Sleep Tracking Mat, which sits under your mattress. It’s minimally invasive and doesn’t require having a screen near your bed. I can’t recommend the new Nest Hub based purely on sleep tracking, but if you were already considering sticking a smart display next to your bed, this makes one of the best models on the market that much more compelling. 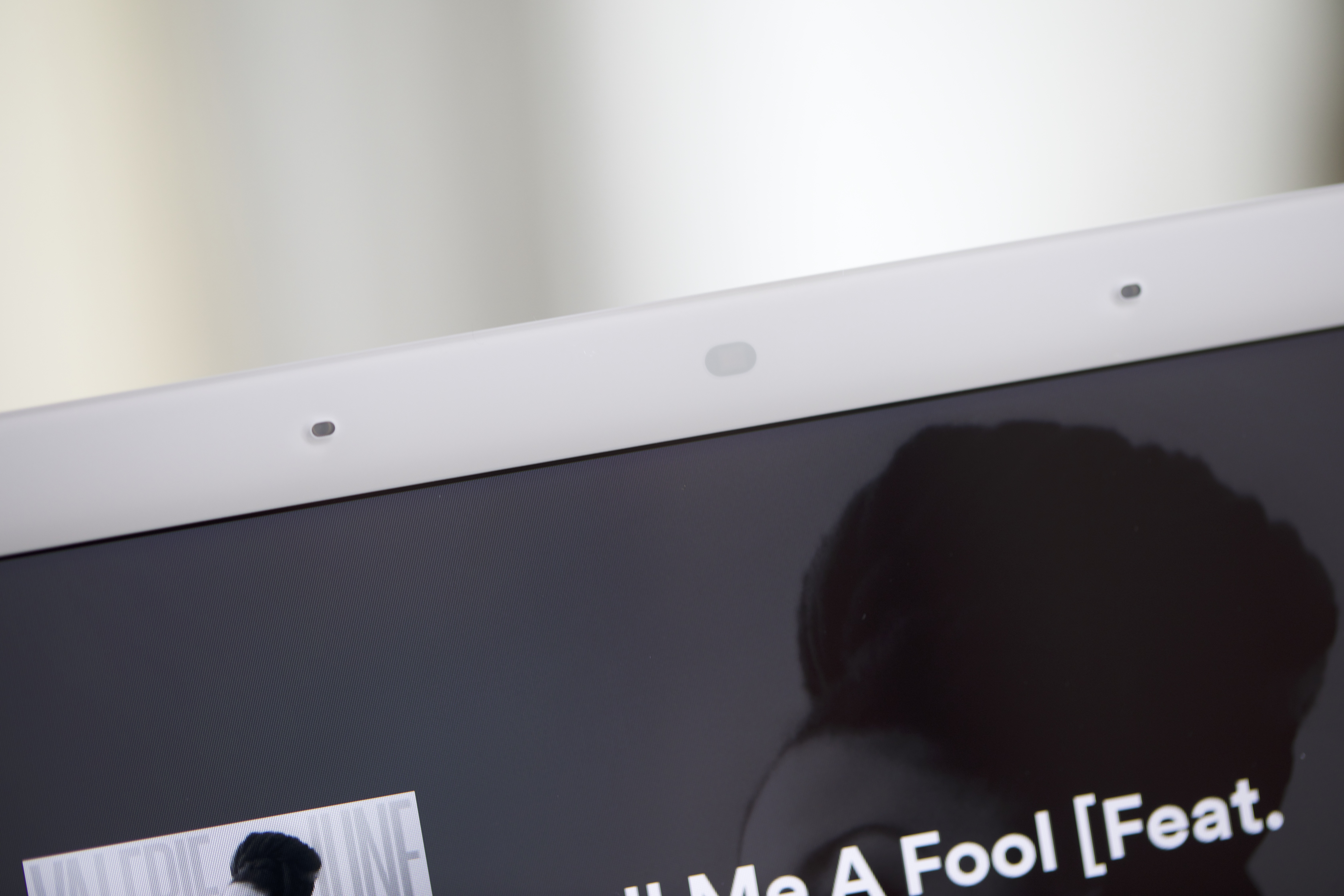 One of the downsides of the Soli tracking is that there isn’t a ton of flexibility in where you can put the device. I don’t presently have a nightstand, for instance, so I had to improvise with a chair for testing. The device needs to be on the side of the bed (not the head or foot) and level with you on the mattress. The screen should be about one or two feet from you while you sleep.

There’s a calibration process, too, though it’s quite quick and you only really need to do it the once, assuming you’re not going to be moving the product around. This was the one time I found myself missing one of the Echo Show’s new features: specifically, a screen that you can manually tilt up and down. It would be a great feature to see in all of the products, going forward.

I’ve been using the sleep tracking for several nights now and have found it pretty accurate — particularly for a product that sits a couple of feet away from the edge of my bed. (Spoiler: I sleep like crap). The on-board wellness feature drills down on the information, as well. In addition to standard info like duration and overall quality, it will tell you how many times you coughed in the night, how many minutes you spent snoring and what your average respiratory rate was throughout the night.

Other info is available, including room temperature (which utilizes a still relatively underused built-in thermometer) and sleep quality, broken down by wake/sleep/restlessness. It’s fairly basic, and it will be interesting to see how much detail the company is ultimately able to drill down on with the given hardware. Given the focus on respiratory health, sleep apnea seems like a no-brainer, but that will likely require some updates, coupled with regulatory scrutiny. 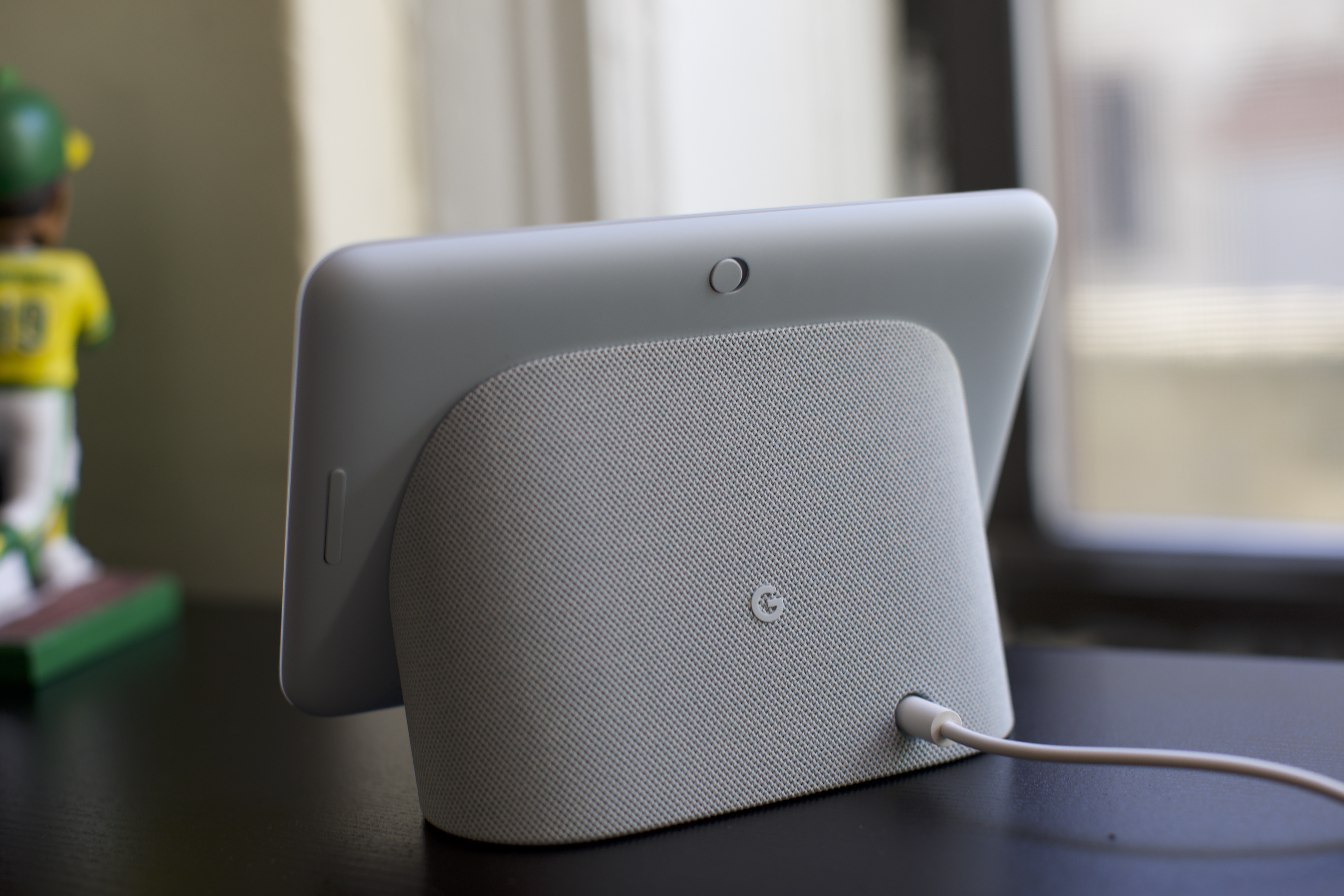 It seems that, as far as sleep is concerned, there’s likely a good deal of room for improvement using the existing hardware. That’s doubly the case, now that Google’s Fitbit acquisition has officially closed. Expect some tighter integration on that front. For now, there’s still some thoughtful sleep integration with things like wake alarms and bedroom smart light functionality.

At $99, Google’s dropped the asking price by a full $50, which certainly softens the blow of what is ultimately a fairly minor update. Two and half years after its introduction, the Nest Hub is still one of the best smart screens you can buy, bolstered by Google’s solid Assistant and software offerings. The new version wouldn’t be the first on my list of sleep trackers, but if you’re looking for a beside smart display/alarm clock, it’s a nice bonus.