Vote counting begins today in the historic effort to unionize Amazon’s Bessemer, Alabama fulfillment center. The warehouse — which opened exactly a year ago to meet ramping up demand as COVID-19 bore down on the U.S. — has become ground zero for one of the most import labor efforts in modern American history.

Voting began by mail on February 8, after Amazon repeatedly attempted to delay the vote or force workers to submit ballots in-person, in spite of pandemic restrictions. Things have gotten predictably heated in the days and weeks leading up to yesterday’s official deadline. Though even by the standards of Amazon’s aggressive public relations strategy, thing went surprisingly far.

This is extraordinary and revealing. One of the most powerful politicians in the United States just said she’s going to break up an American company so that they can’t criticize her anymore. https://t.co/Nt0wcZo17g

In particular, the e-commerce giant leveraged Twitter feeds as part of an aggressive anti-union strategy. The company simultaneously sought to bolster its image of existing working conditions while confronting progressive/leftist politicians like Vermont Senator Bernie Sanders, who played a key role in pushing the company toward the $15/hour warehouse minimum wage it now celebrates.

According to reports, the company’s scorched-earth approach against Sanders and fellow New England Senator Elizabeth Warren were spurred on from the top. Founder Jeff Bezos — who will abdicate his CEO position later this year — was said to have encouraged the offensive. Employees at the companies were said to have flagged the offending tweets internally for suspicious activity. Those tickets were reportedly closed.

After antagonist tweets and denying widespread and longstanding reports about Amazon workers peeing in bottles over fears of falling behind on quotas, the Amazon News Twitter reverted to a more positive approach. It has however, continued activity around the vote, including a bid to install video cameras for monitoring boxes carrying ballots — a bid the National Labor Relations Board (NLRB) has since rejected.

While the vote counting kicks off today, don’t expect immediate results. The process is a methodical and deliberate one. Among other things, there are processes in place for either side to object. It’s clear from Amazon’s recent behavior that the company is well aware that this is far more consequential than the 6,000 or so workers currently employed by the Bessemer location. If the company prevails, it will position the decision as validation of its working conditions. If workers vote to unionize, meanwhile, this could well start a chain reaction across the company. 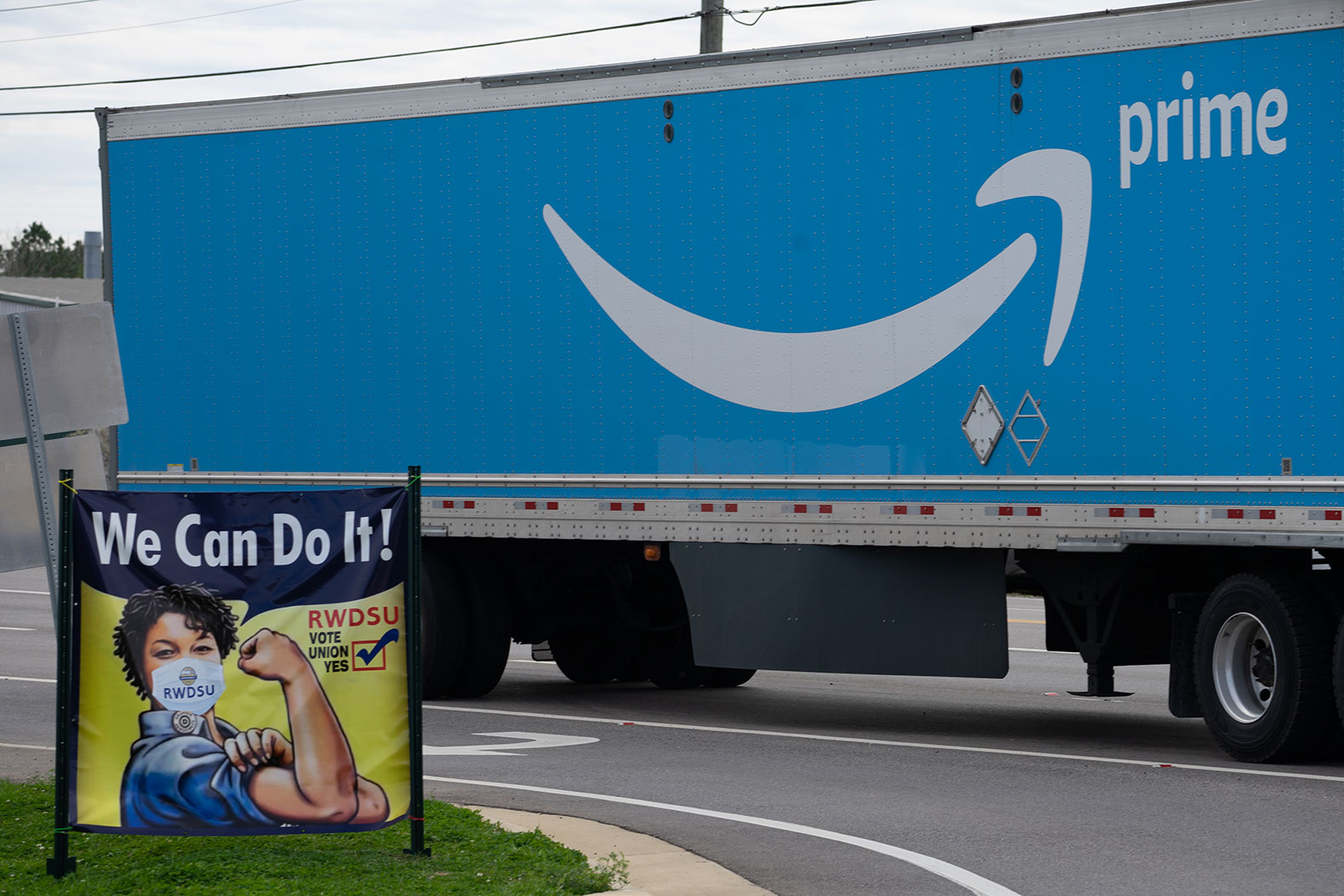 BIRMINGHAM, AL – MARCH 05: A truck passes as Congressional delegates visit the Amazon Fulfillment Center after meeting with workers and organizers involved in the Amazon BHM1 facility unionization effort, represented by the Retail, Wholesale, and Department Store Union on March 5, 2021 in Birmingham, Alabama. Workers at Amazon facility currently make $15 an hour, however they feel that their requests for less strict work mandates are not being heard by management. (Photo by Megan Varner/Getty Images)

This week, workers at Amazon’s Germany facilities are going on strike for four days, following a similar move in Italy last week.

“It’s not just workers in Alabama, it’s workers everywhere who are saying to Jeff Bezos that enough is enough. No matter what language they speak, Amazon workers around the globe will not stand for the working conditions they’ve been forced to endure for too long,” Retail, Wholesale and Department Store Union (RWDSU) President Stuart Applebaum said in a statement.

The NLRB oversees the vote counting. If workers vote to unionize, Bessemer workers will join the RWDSU. The organization has also seen its share of pushback from Amazon. As the company told TechCrunch last week:

Stuart Appelbaum, Chief Disinformation Officer of RWDSU, in an attempt to save his long declining union, is taking alternative facts to a whole new level. But our employees are smart and know the truth—starting wages of $15 or more, health care from day one, and a safe and inclusive workplace. We encourage all of our employees to vote.

Ballots have been sent to the NLRB’s Birmingham offices. There are a number of grounds on which either side can contest the results. These include everything from signatures to whether the person who cast a vote is, in fact, an eligible employee of Amazon. Even after votes are counted, things are likely to drag on. Court battles seem a likely outcome, moving forward. From there, things could ultimately stretch on for weeks or months.

The future of gig work could involve unions and co-ops

The battle is a high stakes one that has made unusual political allies from opposite sides of the aisle. There aren’t too many events that have united politicians ranging from Marco Rubio on one side and Sanders, Warren and Joe Biden on the other. That goes double for something as traditionally divisive as labor unions.

“This campaign has already been a victory in many ways,” Appelbaum said in a statement issued late last week. “Even though we don’t know how the vote will turn out, we believe we have opened the door to more organizing around the country.”