Arm today announced Armv9, the next generation of its chip architecture. Its predecessor, Armv8 launched a decade ago and while it has seen its fair share of changes and updates, the new architecture brings a number of major updates to the platform that warrant a shift in version numbers. Unsurprisingly, Armv9 builds on V8 and is backward compatible, but it specifically introduces new security, AI, signal processing and performance features.

Over the last five years, more than 100 billion Arm-based chips have shipped. But Arm believes that its partners will ship over 300 billion in the next decade. We will see the first ArmV9-based chips in devices later this year.

Ian Smythe, Arm’s VP of Marketing for its client business, told me that he believes this new architecture will change the way we do computing over the next decade. “We’re going to deliver more performance, we will improve the security capabilities […] and we will enhance the workload capabilities because of the shift that we see in compute that’s taking place,” he said. “The reason that we’ve taken these steps is to look at how we provide the best experience out there for handling the explosion of data and the need to process it and the need to move it and the need to protect it.”

That neatly sums up the core philosophy behind these updates. On the security side, ArmV9 will introduce Arm’s confidential compute architecture and the concept of Realms. These Realms enable developers to write applications where the data is shielded from the operating system and other apps on the device. Using Realms, a business application could shield sensitive data and code from the rest of the device, for example. 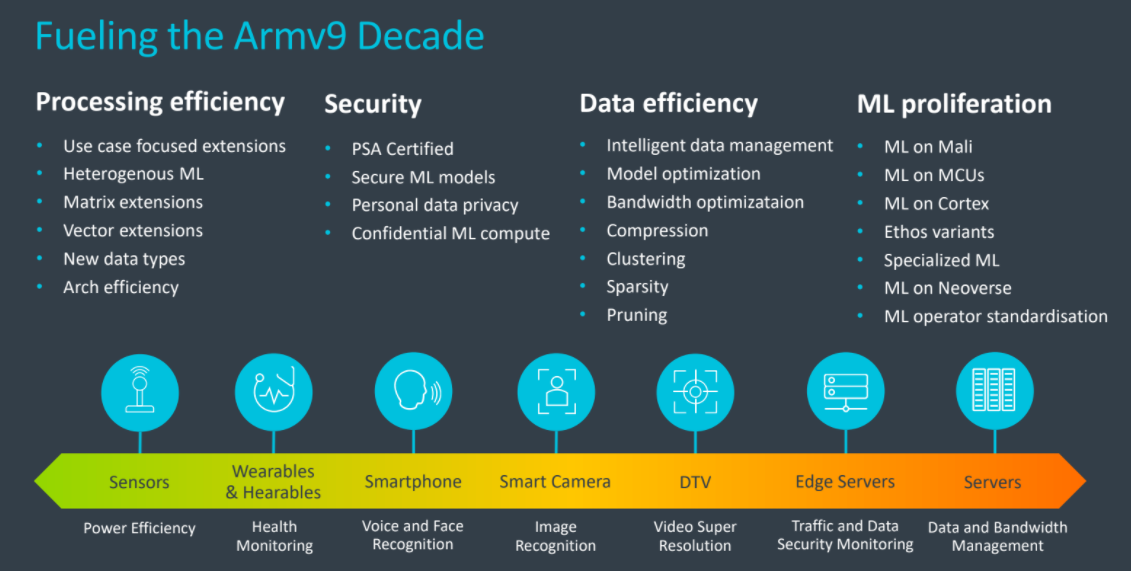 “What we’re doing with the Arm Confidential Compute Architecture is worrying about the fact that all of our computing is running on the computing infrastructure of operating systems and hypervisors,” Richard Grisenthwaite, the chief architect at Arm, told me. “That code is quite complex and therefore could be penetrated if things go wrong. And it’s in an incredibly trusted position, so we’re moving some of the workloads so that [they are] running on a vastly smaller piece of code. Only the Realm manager is the thing that’s actually capable of seeing your data while it’s in action. And that would be on the order of about a 10th of the size of a normal hypervisor and much smaller still than an operating system.”

As Grisenthwaite noted, it took Arm a few years to work out the details of this security architecture and ensure that it is robust enough — and during that time Spectre and Meltdown appeared, too, and set back some of Arm’s initial work because some of the solutions it was working on would’ve been vulnerable to similar attacks. 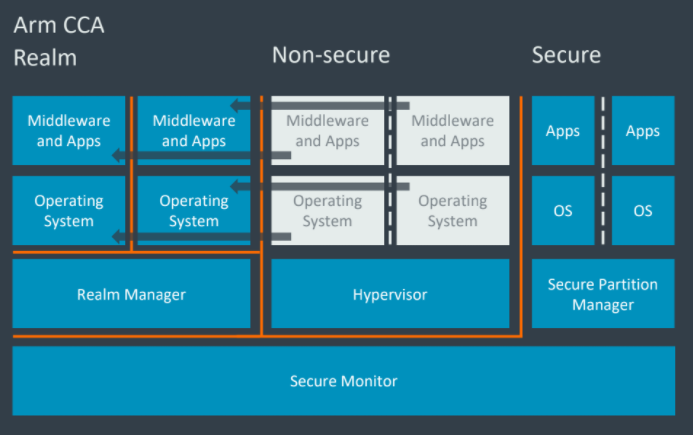 Unsurprisingly, another area the team focused on was enhancing the CPU’s AI capabilities. AI workloads are now ubiquitous. Arm had already done introduced its Scalable Vector Extension (SVE) a few years ago, but at the time, this was meant for high-performance computing solutions like the Arm-powered Fugaku supercomputer.

Now, Arm is introducing SVE2 to enable more AI and digital signal processing (DSP) capabilities. Those can be used for image processing workloads, as well as other IoT and smart home solutions, for example. There are, of course, dedicated AI chips on the market now, but Arm believes that the entire computing stack needs to be optimized for these workloads and that there are a lot of use cases where the CPU is the right choice for them, especially for smaller workloads.

As for raw performance, Arm believes its new architecture will allow chip manufacturers to gain more than 30% in compute power over the next two chip generations, both for mobile CPUs but also the kind of infrastructure CPUs that large cloud vendors like AWS now offer their users.

“Arm’s next-generation Armv9 architecture offers a substantial improvement in security and machine learning, the two areas that will be further emphasized in tomorrow’s mobile communications devices,” said Min Goo Kim, the executive vice president of SoC development at Samsung Electronics. “As we work together with Arm, we expect to see the new architecture usher in a wider range of innovations to the next generation of Samsung’s Exynos mobile processors.”