The coming wave of electric vehicles will require more than thousands of charging stations. In addition to being installed, they also need to work — and today, that isn’t happening.

If a station doesn’t send out an error or a driver doesn’t report it network providers might never know there’s even a problem. Kameale C. Terry, who co-founded ChargerHelp!, an on-demand repair app for electric vehicle charging stations, has seen these issues firsthand.

One customer assumed that poor usage rates at a particular station was due to a lack of EVs in the area, Terry recalled in a recent interview. That wasn’t the problem.

“There was an abandoned vehicle parked there and the station was surrounded by mud,” said Terry who is CEO and co-founded the company with Evette Ellis.

Demand for ChargerHelp’s service has attracted customers and investors. The company said it has raised $2.75 million from investors Trucks VC, Kapor Capital, JFF, Energy Impact Partners, and The Fund. This round values the startup, which was founded in January 2020, at $11 million post-money.

The funds will be used to build out its platform, hire beyond its 27-person workforce and expand its service area. ChargerHelp works directly with the charging manufacturers and network providers.

“Today when a station goes down there’s really no troubleshooting guidance,” said Terry, noting that it takes getting someone out into the field to run diagnostics on the station to understand the specific problem. After an onsite visit, a technician then typically shares data with the customer, and then steps are taken to order the correct and specific part — a practice that often doesn’t happen today.

While ChargerHelp is couched as an on-demand repair app, it is also acts as a preventative maintenance service for its customers.

The idea for ChargerHelp came from Terry’s experience working at EV Connect, where she held a number of roles including head of customer experience and director of programs. During her time there, she worked with 12 different manufacturers, which gave her knowledge into inner workings and common problems with the chargers.

It was here that she spotted a gap in the EV charging market.

“When the stations went down we really couldn’t get anyone on site because most of the issues were communication issues, vandalism, firmware updates or swapping out a part — all things that were not electrical,” Terry said.

Can solid state batteries power up for the next generation of EVs?

Terry often took matters in her own hands if issues arose with stations located in Los Angeles, where she is based.

“If there was a part that needed to be swapped out, I would just go do it myself,” Terry said, adding she didn’t have a background in software or repairs. “I thought, if I can figure this stuff out, then anyone can.”

In January 2020, Terry quit her job and started ChargerHelp. The newly minted founder joined the Los Angeles Cleantech Incubator, where she developed a curriculum to teach people how to repair EV chargers. It was here that she met Ellis, a career coach at LACI who also worked at the Long Beach Job Corp Center. Ellis is now the chief workforce officer at ChargerHelp.

Since then, Terry and Ellis were accepted into Elemental Excelerator’s startup incubator, raised about $400,000 in grant money, launched a pilot program with Tellus Power focused on preventative maintenance, landed contracts with EV charging networks and manufacturers such as EV Connect, ABB and Sparkcharge. Terry said they have also hired their core team of seven employees and trained their first tranche of technicians. 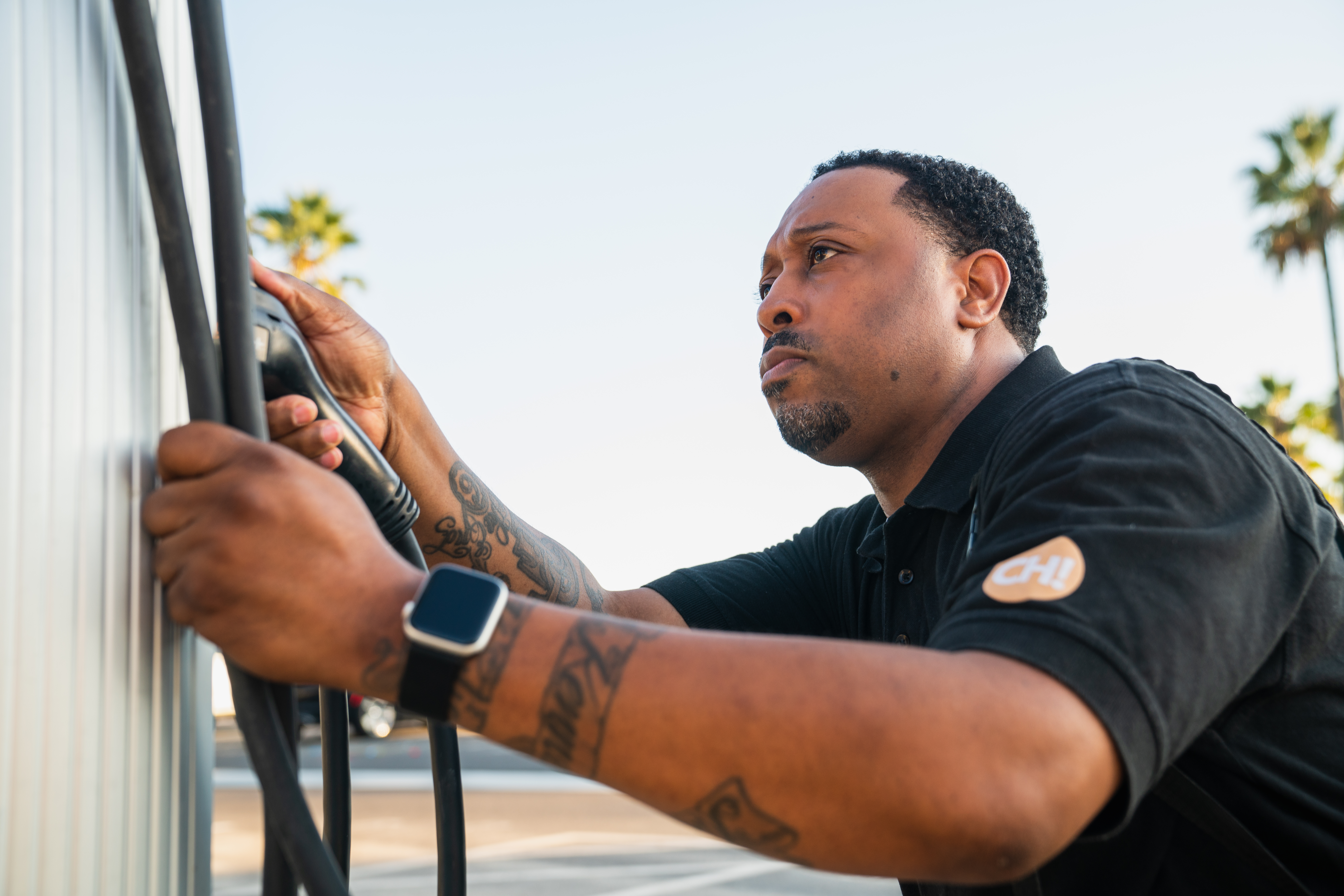 ChargerHelp takes a workforce-development approach to finding employees. The company only hires in cohorts, or groups, of employees.

The company received more than 1,600 applications in its first recruitment round for electric vehicle service technicians, according to Terry. Of those, 20 were picked to go through training and 18 were ultimately hired to service contracts across six states, including California, Oregon, Washington, New York and Texas. Everyone who is picked to go through training are paid a stipend and earn two safety licenses.

The startup will begin its second recruitment round in April. All workers are full-time with a guaranteed wage of $30 an hour and are being given shares in the startup, Terry said. The company is working directly with workforce development centers in the areas where ChargerHelp needs technicians.