Neighbor, which operates a self-storage marketplace, announced Wednesday that it has raised $53 million in a Series B round of funding.

At a time when the commercial real estate world is struggling, self-storage is an asset class that continues to perform extremely well. Neighbor’s unique model aims to repurpose under-utilized or vacant space — whether it be a person’s basement or the empty floor of an office building — and turn it into storage.

Colton Gardner, Joseph Woodbury and Preston Alder co-founded Neighbor.com in 2017 with the mission of giving people a more accessible and personal alternative to store their belongings. 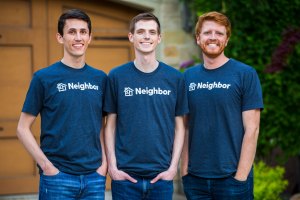 The $40 billion self-storage industry is ripe for a shake-up, considering that most people are used to renting space out of buildings located in not necessarily convenient locations.

Neighbor has developed a unique peer-to-peer model, connecting “renters” in need of storage space with “hosts” in their neighborhood who are willing to lease storage space in their home, garage or even driveway. The company says it has hosts on the platform making more than $50,000 a year in passive income.

“We really grew into a national business over the last year and now have active renters in more states than Public Storage, which is a $43 billion publicly traded company,” CEO Woodbury said.

Neighbor makes money by charging a service fee (a sliding-scale percentage) of each rent. Its algorithms provide suggested rental fees for hosts.

“If you think about it, fundamentally on the demand side, everyone’s moving out of these major metro areas like New York and San Francisco, and are moving to these more rural locations. All that moving activity has created a lot more storage demand,” Woodbury told TechCrunch. “In addition to that, people are just spending more time at home and cleaning out their homes more. And they no doubt need storage as a result of that.”

It also doesn’t hurt that the company claims the self-storage offered on its marketplace on average is priced about 40% to 50% less than traditional storage facilities.

Neighbor also partners with commercial real estate operators to turn their under-utilized or vacant retail, multifamily or office space into self-storage. This provides new revenue streams to landlords hurting from the pandemic keeping so many people at home. And that increased demand led to Neighbor’s commercial real estate footprint growing 10x in 2020.

With its new capital, the company plans to expand its nationwide network of hosts and renters as well as continue to spread awareness of its marketplace.

“We have tens of millions of square feet of self storage on the platform,” Woodbury said. “The beauty of that square footage is that it’s in every single state. But we want to continue to expand nationally and as we grow and mature, we’ll turn our eyes globally as well.”

Interestingly, before leading the round for Neighbor, Fifth Wall approached the company about business development opportunities. Partner Dan Wenhold said he offered to introduce the concept to the real estate venture firm’s LPs, which include more than 65 of the world’s largest owners and operators of real estate from 15 countries. For example, Fifth Wall partners Acadia Realty Trust and Jamestown are already onboarding properties onto Neighbor’s platform.

“We are sort of the bridge between the largest owners and operators of physical real estate assets and the most disruptive technologies that are impacting those property managers and landlords, Wenhold said. “And Neighbor fits perfectly into that thesis for us.”

After introducing Neighbor to a short list of Fifth Wall’s strategic LP partners, the feedback the firm got “was fantastic,” Wenhold said.

“A lot of owners in retail, office and even multi-family expressed interest in working with Neighbor to help monetize space,” he added.

The company’s mission also has a sustainable component considering that creating self-storage space out of existing property can help minimize the amount of new construction that takes place.

Fifth Wall, Wenhold added, is aware of the waste and the emissions that come from the construction process to build new space and admires Neighbor’s role in minimizing that.

“Our firm ardently pursued the opportunity to invest in a transformative proptech business like Neighbor,” he said.