Challenger banks continue to make significant advances in attracting customers away from the big incumbents by providing more modern, user-friendly tools to manage their money. Today, one of the trailblazers in this area, Kuda Technologies, is announcing funding to continue building out its specific ambition: to provide a modern banking service for Africans and the African diaspora, or as co-founder and CEO Babs Ogundeyi describes them, “every African on the planet, wherever you are in the world.”

The company, which currently offers mobile-first banking services in Nigeria, has picked up $25 million in a Series A being led by Valar Ventures, the firm co-founded and backed by Peter Thiel, with Target Global and other unnamed investors participating. This is the first time that Valar — which has invested in a number of fintech startups, including N26, TransferWise, Stash, and just in the last week BlockFi and BitPanda — has backed an African startup.

Kuda currently provides services for consumers to save and spend money, and it has recently introduced overdrafts (essentially revolving credit for individuals). Ogundeyi said in an interview that the plan is to use these new funds to continue expanding its credit offerings, to build out services for businesses, to add on more integrations, and to move into more markets.

The funding is coming on the heels of very strong growth for Kuda, which is co-headquartered in London and Lagos. When we last wrote about the startup, four months ago, it had just closed a seed round of $10 million led by Target Global. That was, at the time — and I think still is — the largest-ever seed round raised by a startup out of Africa, and thus as much of a milestone for the tech industry there as it was for Kuda itself.

At the time of the seed round, Kuda had registered 300,000 customers: now, that figure has more than doubled to 650,000, and tellingly, that base is spending more money through the Kuda app.

“In November we were doing about $500 million in transactions per month,” Ogundeyi said, for services like bill payments, card transactions, and phone top-ups. “We closed February at $2.2 billion.” 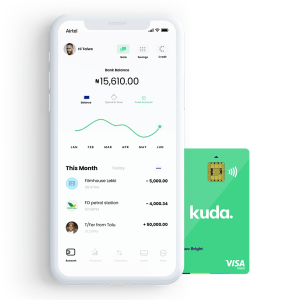 Kuda, as we described in our profile of the company when covering its seed round, is following in the footsteps of a number of other so-called “neobanks”, building a suite of banking services with a more accessible user interface and a more modern approach: you interact with the bank using a mobile app, and in addition to basic banking services, it provides tools to help people manage their money more intelligently.

But Kuda is also different from many of these, specifically because it taps into some financial practices that are unique to its market.

As Ogundeyi describes it, most people who are employed by companies will have “salary accounts” at banks, where companies pay in a person’s wages on a regular basis. These will typically be at incumbent banks, but they do not offer the same ranges of services to customers. (No mobile apps, no facilities to buy mobile top-ups or make other kinds of bill payments, no AI-based calculators to figure out your monthly spend and provide suggestions on how to manage your budget, and so on.)

That has opened a gap in the market for others to provide those services in their place. Kuda’s deposits, Ogundeyi said, typically start as basic transfers that people make from their “salary accounts” elsewhere. These start out small, maybe 20% of a person’s wages, but as they find themselves using Kuda’s payment and other tools more, they are increasing how much they transfer in each payment period.

“As the trust increases you’re naturally more comfortable having money with Kuda,” he said. The next stage from that will be people depositing money directly with Kuda. A small minority already do this, he added, although the startup “has a bit more work to do” to get more companies integrated into its platform. (This is one of the areas that will be developed with this latest round of funding.)

In turn, having more money in Kuda accounts is likely to spur another wave of services being turned on at the startup, such as loans with more competitive interest rates, because they will not just be based on how much money people have but also their spending histories on the platform. “We can offer loans to salaried customers instantly as long as their salary is with Kuda,” he said.

Much of this is being enabled because of how Kuda is built. A lot of challenger banks have tapped into a world of finance and banking APIs built by another wave of fintech startups, partnering with other banks to provide backend deposit and other services: their value-add is in building efficient customer service and tools to help people manage and borrow money in smarter ways.

Kuda, on the other hand, has its own microfinance banking license from the central bank of Nigeria. This means that on top of building those same money management services, Kuda can also issue debit cards (in partnership with Visa and Mastercard), manage payments and transfers, and build all of the services in the stack itself, including those salary account services and loans. (Kuda does have partnerships with incumbent banks, specifically Zenith Bank, Guaranteed Trust and Access Bank, for people to come in for physical deposits and withdrawals when needed.)

While the service is still only live in Nigeria, the “vision is still to serve all Africans in Africa as well as outside of it,” Ogundeyi said. The first step of that will likely be Nigerians outside of Nigeria — most likely in the UK, where Kuda already has a headquarters, and where it has a ready market: London alone has been estimated to be home to upwards of 1 million Nigerian immigrants and people of Nigerian descent (the number born in Nigeria is considerably smaller, more like 200,000).

He added that the startup is also at work on preparing for the next countries on the continent to expand its service, another area where this funding will go: “It will let us fast track teams, on-the-ground operational teams,” he said.

The bigger picture is that the market for financial services targeting Africans has been on a significant upswing and so we will be seeing a lot more activity coming out of the region, and out of other tech companies increasingly doing more in that part of the world.

PayPal, to be clear, has been active in Nigeria since 2014 but partnering with a significant player in the region represents an important step for it: Flutterwave itself earlier this month raised $170 million and became Africa’s latest unicorn, in what is still a pretty small list.

The fact that there is so much more to be done with payments and more financial services leaves the door open wide for Kuda to move in a number of different directions if it chooses. Having customers in two countries, especially with one foot in the developed market and another in an emerging market, for example, gives the company an interesting window into the world of remittances.

Money transfer has been one of the very biggest, and most important financial services for African diasporas — alongside those from many other emerging markets. Even in cases where people are “unbanked” and have no other financial footprints, they have been turning to remittance services to send money home to their families from abroad. Kuda, with its integrations into people’s salaries, could easily become an efficient, one-stop-shop conduit for that activity too. (That’s one reason, likely, that Remitly has also moved into starting to offer accounts to its users in originating countries.)

All of this to say that Valar’s making a new kind of bet here, but one laden with possibilities and a differentiated approach compared to the rest of its investment activities.

“Nigeria is at a tipping point in the adoption of digital banking,” noted Andrew McCormack, a general partner and co-founder at Valar, who led its investment here. “With the rapidly growing, youthful population who are open to new financial alternatives, Kuda is well-positioned to benefit and will transform the landscape of African banking. We are excited to lead their Series A and continue on the journey alongside Kuda.”