Google this week announced its was cutting the commissions it charges Android app developers who publish on its Google Play marketplace, following a similar move by Apple last year aimed at fending off antitrust claims. According to Google’s own estimates, 99% of its developers who sell goods and services would see their fees cut in half, as a result of the move which reduces the 30% commission to 15% on the first million dollars a developer earns. Now, data shared by App Annie helps to further illustrate the distribution of earnings on the Google Play Store, as well as how that compares with Apple’s counterpart.

According to App Annie, the vast majority (97.9%) of Google Play publishers made less than $1 million in annual consumer spend in 2020, which allows them to qualify for this reduced commission. But it’s worth noting that the way Google has implemented its new policy is different from Apple, as it will reduce the commission on the “first” $1 million in revenue made during the year — not make $1 million the threshold that triggers a commission increase, like Apple is doing. That means more developers could benefit from Google’s policy change.

It’s interesting to see how few developers across Google Play will ever have to worry about the higher commission bracket. The majority are seeing very small returns from their paid downloads, in-app purchases or subscription offering, the data indicates. This has been an ongoing trend for Android apps, in fact, reflecting Android’s traction in emerging markets where consumers don’t often spend on apps, which has forced many developers to lean on ads in addition to in-app purchases to generate revenues. 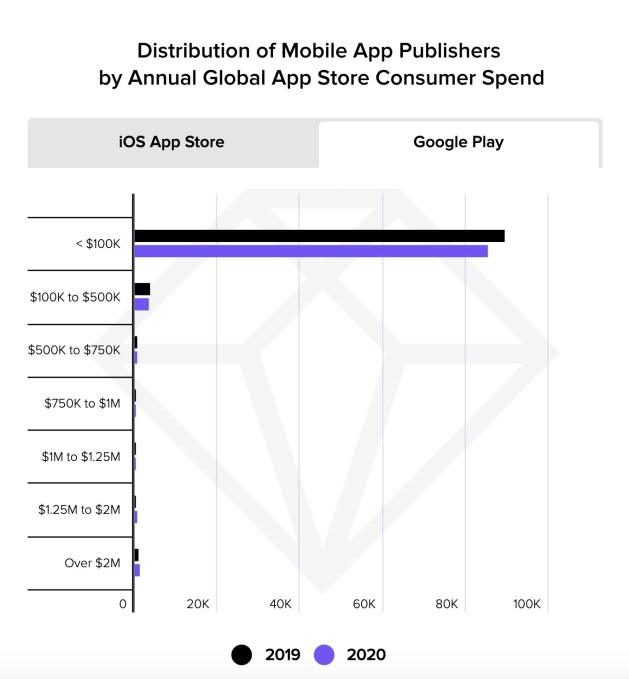 The groups that would actually see the 30% commission apply to some of their sales were very small.

This distribution pattern where the largest group of developers is making under $100,000 and a sliver of the market was pulling in larger figures, including the over $2 million bracket, was similar to Apple’s App Store in 2020. But in Apple’s case, it sees more developers earning a decent income in the other sub-$1 million brackets than Google Play does. 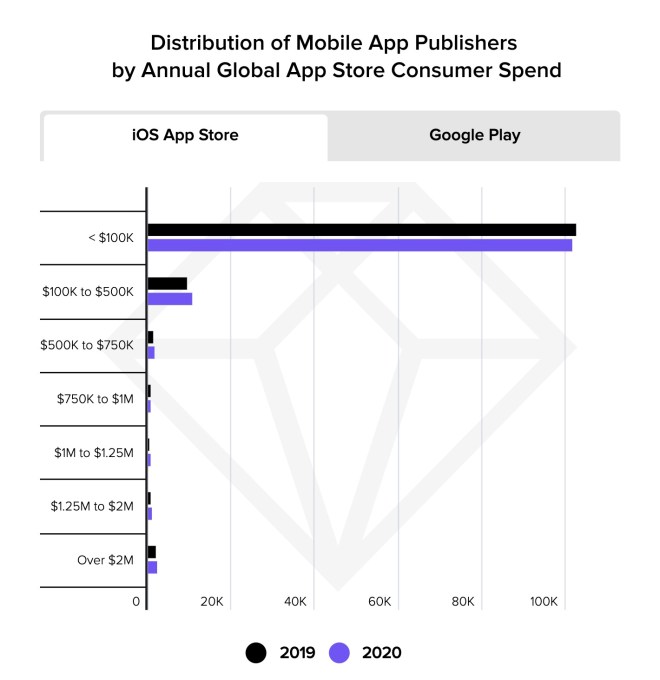 In other words, these policy changes help a large majority of mobile app developers by allowing them to take home more money, and they give Apple and Google a good way to demonstrate to regulators that they’re not wielding their market power against the “little guy.”

For example, App Annie says that publishers making up to $1 million in consumer spend only comprised 5% of total Google Play consumer spend in 2020, even though 94% of Google Play apps offer some sort of in-app purchase mechanism.

But ultimately, the new policies have far less impact on the revenue the platforms themselves are pulling in via commissions. However, Google’s rule makes it simpler and more fair for developers who are still trying to grow their businesses despite crossing the $1 million threshold.