Talk about surprise comebacks. This morning Google announced the arrival of the next-gen Nest Hub. In spite of rebranding from Google Home Hub back in 2019, the smart screen hasn’t seen many changes since its 2018 introduction. Today’s arrival doesn’t represent a huge upgrade from its predecessor, but it does support a familiar — and largely forgotten — face.

We haven’t heard a peep from Project Soli since the technology was introduced with the Pixel in late-2019. The miniature, motion-sensing radar tech was positioned to be a major selling point, finally arriving on a device some four years after being announced. Applications were relatively few and far between — including gesture detection and a weird, one-off Pokémon app.

And then it just sort of went away. The Pixel 5 arrived the following year, without a trace of Motion Sense. Abandoning features certainly isn’t unheard of in consumer electronics, but it seemed odd for something in which Google had clearly invested time and resources.

Soli’s reemergence in the new Nest Hub is certainly unexpected, but may ultimately make more sense than any of its attempted mobile applications. The primary use here is sleep tracking, the biggest update between the new Nest Hub and the original. As for why Soli, the answer goes deeper than the fact that Google was looking for a new home for its existing tech (though that no doubt also played a role).

Like the first-gen product, there’s no camera on the new Nest Hub. Google’s decision to keep the tech off the device is a breath of fresh air in a world where the new Amazon Echo uses figure tracking to actually follow you around the room. As before, you can always opt for the Nest Hub Max if that feature’s important to you. But the company rightfully noted that the first-gen model was often deployed at bedsides.

Which leads us to:

The easy answer is a wearable device. Google now has a much stronger foothold in that world now that its Fitbit acquisition has cleared. But that deal is going to take some time to fully take root. And besides, as someone who has tested a lot of wearables in my day, I can definitely say that, no matter how comfortable, I sleep better without one on my wrist. Certainly the irony of being kept awake by a sleep tracker has not escaped me.

Soli consists of a millimeter-wave frequency-modulated continuous wave (FMCW) radar transceiver that emits an ultra-low power radio wave and measures the reflected signal from the scene of interest. The frequency spectrum of the reflected signal contains an aggregate representation of the distance and velocity of objects within the scene. This signal can be processed to isolate a specified range of interest, such as a user’s sleeping area, and to detect and characterize a wide range of motions within this region, ranging from large body movements to sub-centimeter respiration. 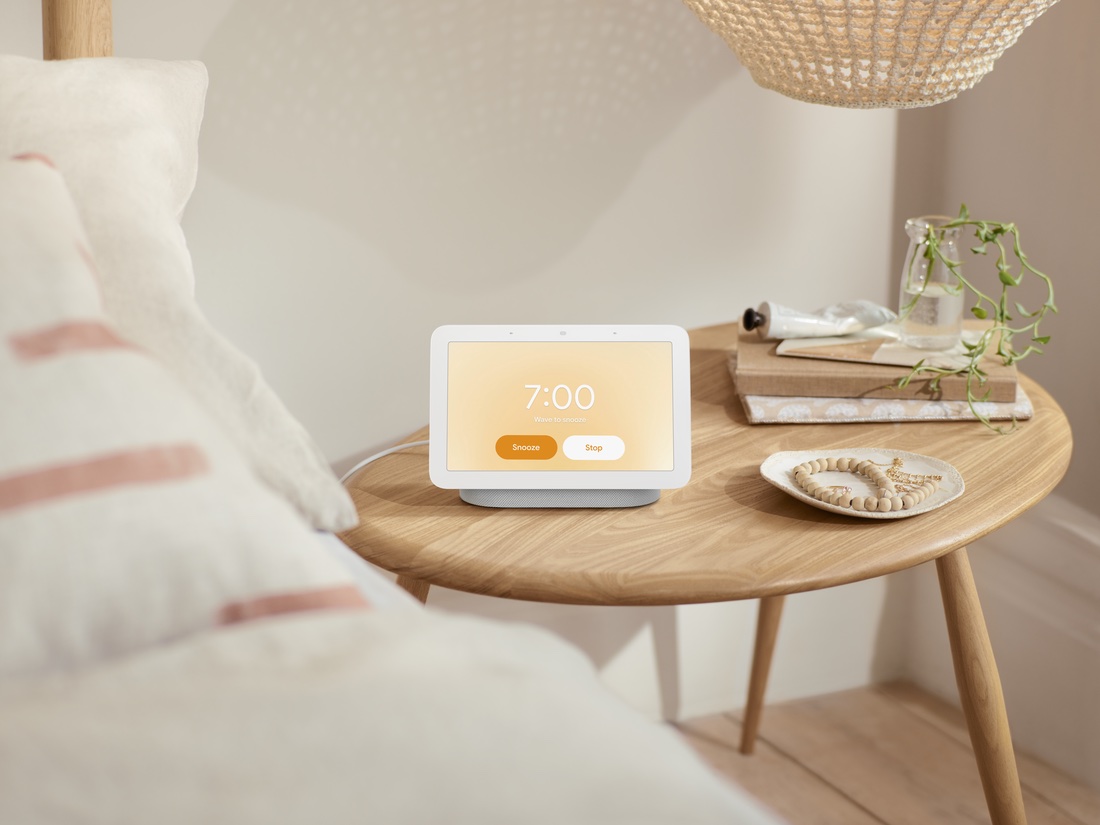 So, basically, you’re trading camera-based sensing for mini-bedside radar. It’s a weird thing to wrap your brain around, certainly. The biggest thing here is that the motion-tracking data is not collecting any images, just data based on movement.

The Sleep Sensing system was trained on more than 100,000 hours of sleep data, according to the company, with TensorFlow being used to analyze data. Among other things. It’s able to eliminate external movement like ceiling fans, after the initial calibration process is completed. In addition to tracking, the system leverages other sleep-centric features that were rolled out to the last Nest Hub via software update, including Sunrise Alarm and the ability to snooze your wake-up call with a gesture.

There are other software updates on-board as well, including a new smart home interface. On the whole, however, there really aren’t too many improvements beyond sleep tracking — which is actually okay, since the original remains one of the better smart screens on the market. The speaker got a little bit of love, with added bass, but even that is largely the same. The screen size remains the same at 7-inches, while the overall device footprint is a bit larger to accommodate the slight speaker improvement. The body is made from 54% post-consumer plastic.

At $99, the price is certainly right. Google shaved off $49 from the original Hub. It’s up for pre-order starting today and will be available for sale on the 30th.