Sanchali Pal first woke up to the world’s climate crisis after watching the 2008 documentary Food Inc.

The Princeton undergraduate saw the film in 2011, and it started her on the journey that would lead her to launch Joro, the Sequoia-backed startup that monitors consumer spending to offer tips on how to offset and reduce a user’s carbon footprint.

After scoring a job at the development firm Dalberg, then working in India and Ethiopia, Pal returned to the U.S. to pursue an MBA at Harvard Business School. She initially thought she’d focus on transportation, but her mind kept returning to consumer consumption habits and the potential to reduce CO2 emissions by targeting consumer behavior.

“I started thinking about it in the fall of my first year at business school, and I kind of put it on the back burner because I didn’t know how to do it from a practical stand. I wasn’t a technology person. I didn’t build software myself,” Pal told Jason Jacobs, the host of the My Climate Journey podcast. “I didn’t know how we would capture the data to show someone their carbon footprint and help them reduce it until I met my co-founder [J. Cressica Brazier], and I met her at an MIT event in the spring of that year two years ago, and the wheels started turning, maybe there’s a tool here that we could build together.”

The Joro app uses consumer spending data culled from integrations with Plaid to identify changes in users’ personal habits that can make an impact on their overall carbon footprint — based on their personal spending.

The app also has a community component, connecting users with sustainability challenges, classes and other educational tools, along with a social network to communicate with peers to track relative progress.

Consider it a version of keeping up with the Joneses, but for planetary health and eco-consciousness.

To date, the app’s community of users have reduced nearly 6 million kilograms of carbon dioxide emissions in 2020. Which sounds impressive, but given reductions in travel due to COVID-19 mitigation restrictions, the largest contribution that a consumer can make is reducing their meat consumption. While that only leads to roughly 4% reductions in global carbon emissions, it reduces about 1,200 pounds of carbon emissions. Over the 6 million kilograms that would mean a little bit over 10,000 people may be using the app.

Pal would not comment on the number of users her company’s app has managed to attract. 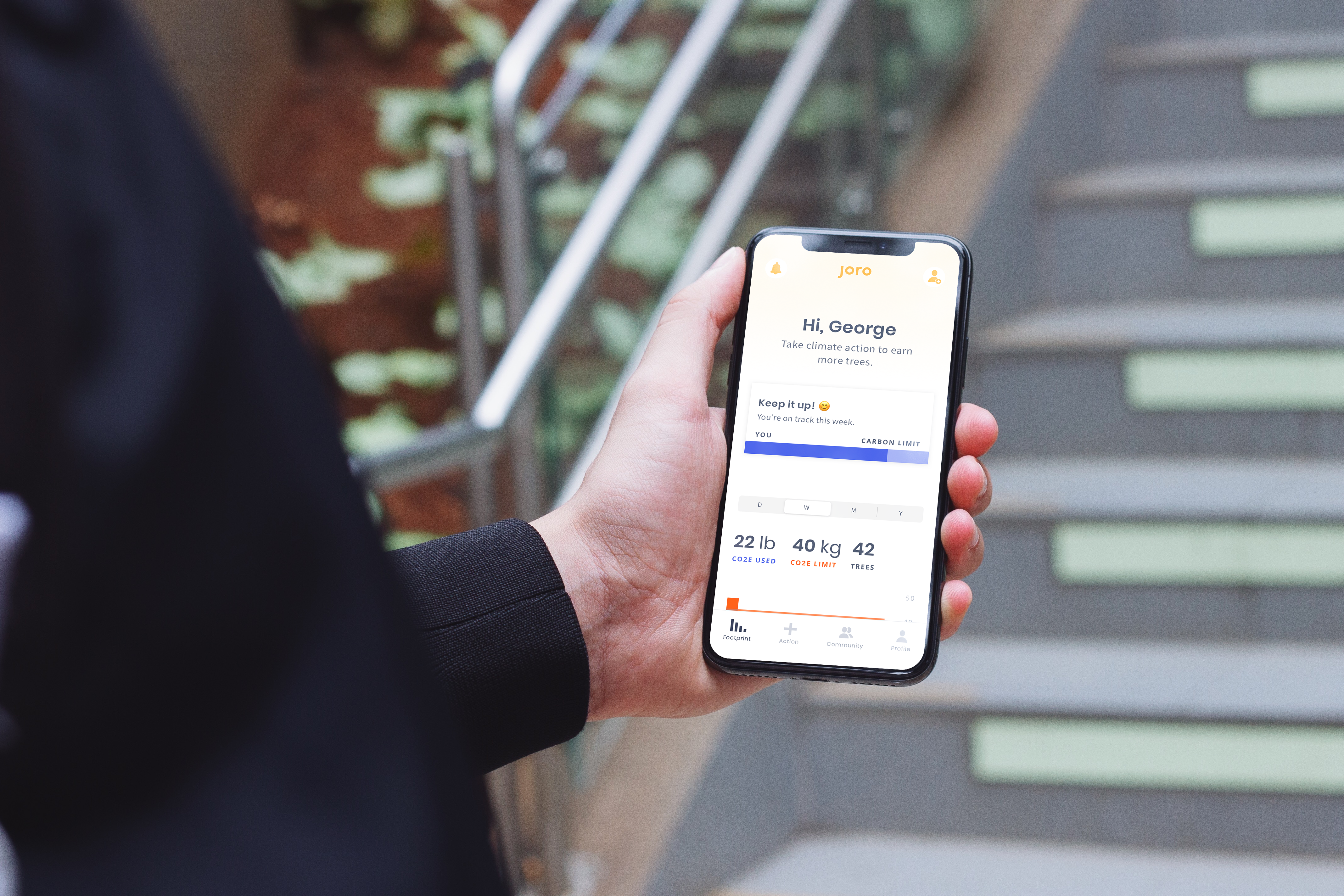 What the company does have now is $2.5 million in seed funding from investors including Sequoia Capital, which doubled down on its $1 million pre-seed commitment made when Joro was part of the firm’s early-stage founder program.

“At Expa we are focused on backing remarkable founders that are passionate about the product they are building,” said Expa founder Garrett Camp in a statement. “We saw that in Sanchali – she had a big vision and conveyed it very strongly to us. We have conviction that Joro can build a great product and a great business. The world will be a better place because of what Joro will bring to market.”

Pal estimates that behavioral changes and better consumer choices can reduce an individual’s carbon footprint by up to 30%.

It’s a bet that other companies are making too. For instance, the Los Angeles challenger bank Aspiration, founded by Andrei Cherny, has a tool that can measure the “social impact” of a consumer’s monthly spending — that includes the climate impact of daily consumption.

Pal hopes that through the education and community components of the app, consumers can put pressure on the systems and industries that are the primary producers of greenhouse gas emissions to change their ways.

“Systems are made of people. Like us,” Pal wrote in a blog post. “Companies and governments change when enough people demand it through their actions and behaviors. No, we’re not a silver bullet — we need policymakers and businesses to take sweeping action. But we’re not powerless either. Together we can accelerate the pace of change by demonstrating our demand for a cleaner society.”

Read the original post: Sequoia picks its horse in the consumer carbon offset market, leading a .5 million round for Joro