Early-stage startups are confident of re-opening their offices in the wake of the COVID-19 within the next six months. But there will be changes.

An exclusive survey compiled by Founders Forum, with TechCrunch, found 63% of those surveyed said they would only re-open in either 1-3 months or 3-6 months — even if the government advises that it is safe to do so before then. A minority have re-opened their offices, while 10% have closed their office permanently.

However, there will clearly be long-term impact on the model of office working, with a majority of those surveyed saying they would now move to either a flexible remote working model (some with permanent offices, some without), but only a small number plan a “normal” return to work. A very small number plan to go fully “remote.” Many cited the continuing benefits of face-to-face interaction when trying to build the team culture so crucial with early-stage companies.

Massive office closures during pandemic
Of the 328 that answered the survey, 84% said they had closed their office during the COVID-19 pandemic; 5% said they had not; and 8% said it was not applicable (i.e. no office to close). The majority of those answering were at seed or pre-seed stage, with a minority past Series A stage. 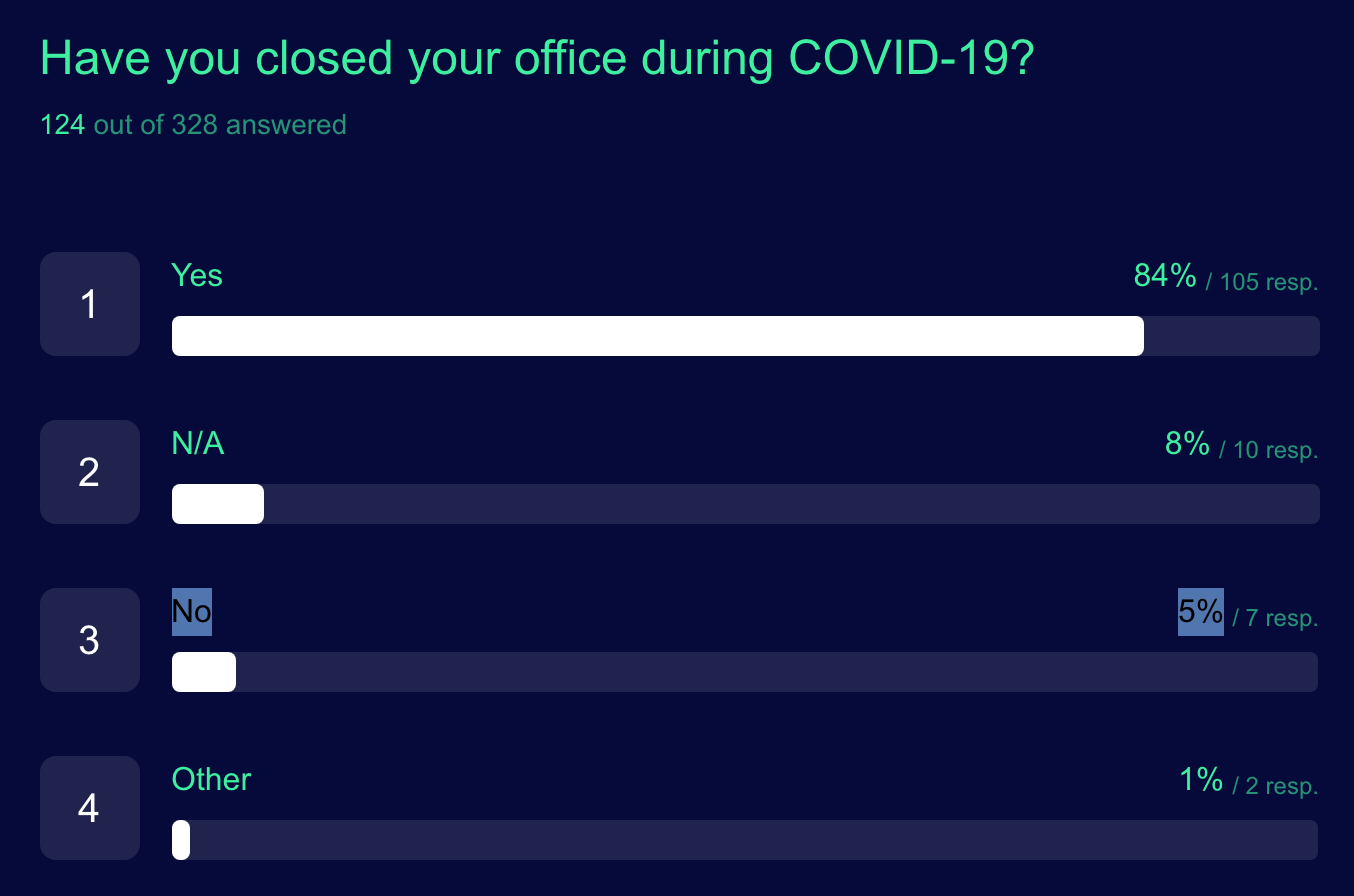 The survey was launched by TechCrunch and U.K. nonprofit Founders Forum in order to assess how startups will work in the future, in the wake of the global COVID-19 pandemic’s impact on office working and the shift to “Work From Home” policies. Of the 328 answers, 61% were from the U.K., 20% from the U.S. and the rest from other countries.

Founders Forum’s Brent Hoberman, who initiated the study, commented on the results: “The results prove both that early-stage tech founders are adaptable and that entrepreneurship is one of the best-suited professions to remote work. The majority of early-stage founders haven’t seen productivity take a hit during this period, but it remains to be seen what happens to creative output, team culture and training over the longer term. Furthermore, there are clearly opportunities for new types of even more flexible shared social workspaces with a vast majority of those surveyed still seeing value in face-to-face interaction.”

Remote working ups productivity, but impacts culture
Remote working during COVID-19 appears not to have impacted output, with 55% of startups saying they had worked more than normal, 30% the same hours, and 13% fewer hours. 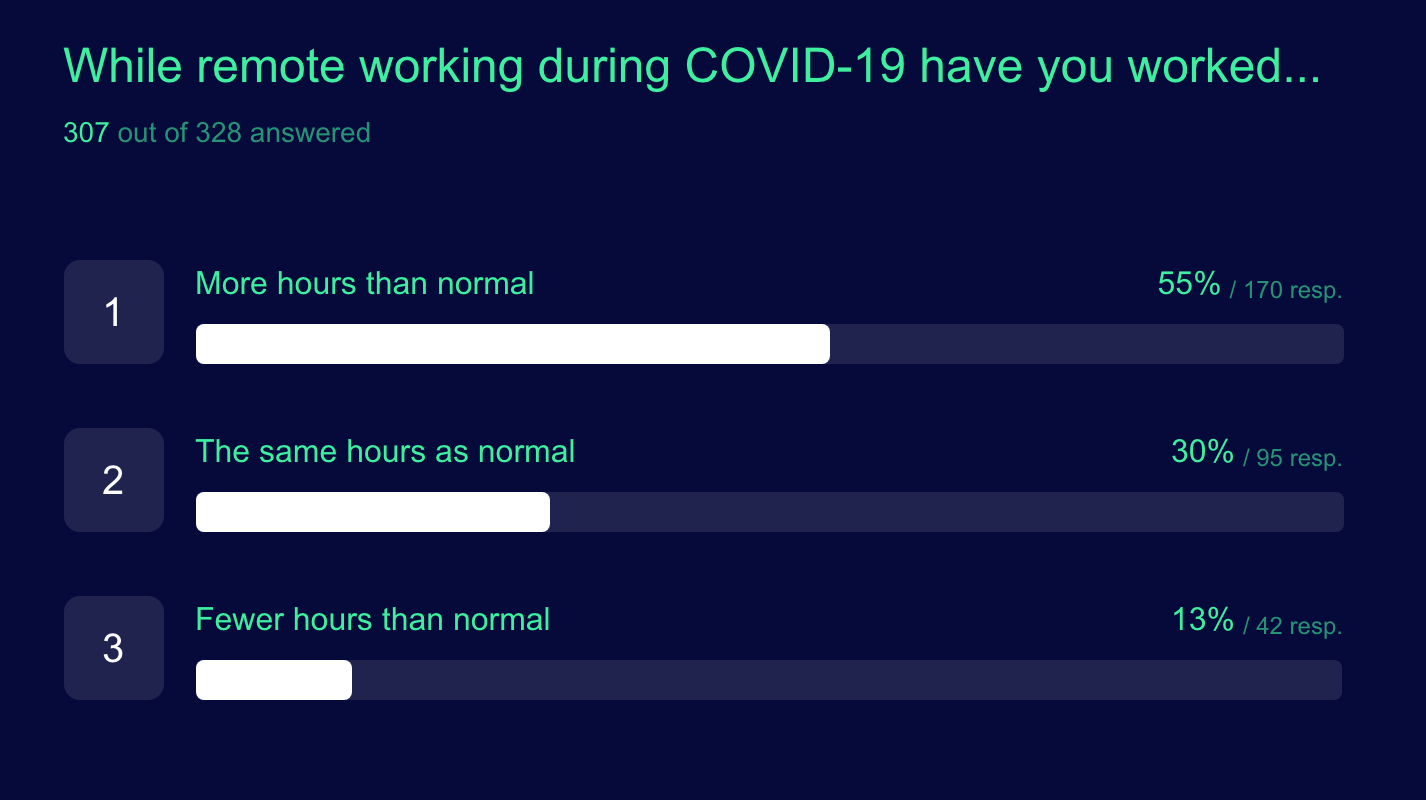 In answer to the question: “Are you going to permanently change how and where your team works together?”: 48% said they would adopt a more flexible working arrangement (e.g. remote work days); 33% will adopt a remote-first setup (e.g. rented space for key meetings/workshops); 13% plan a normal return to work; and just 4% will adopt a fully remote configuration. 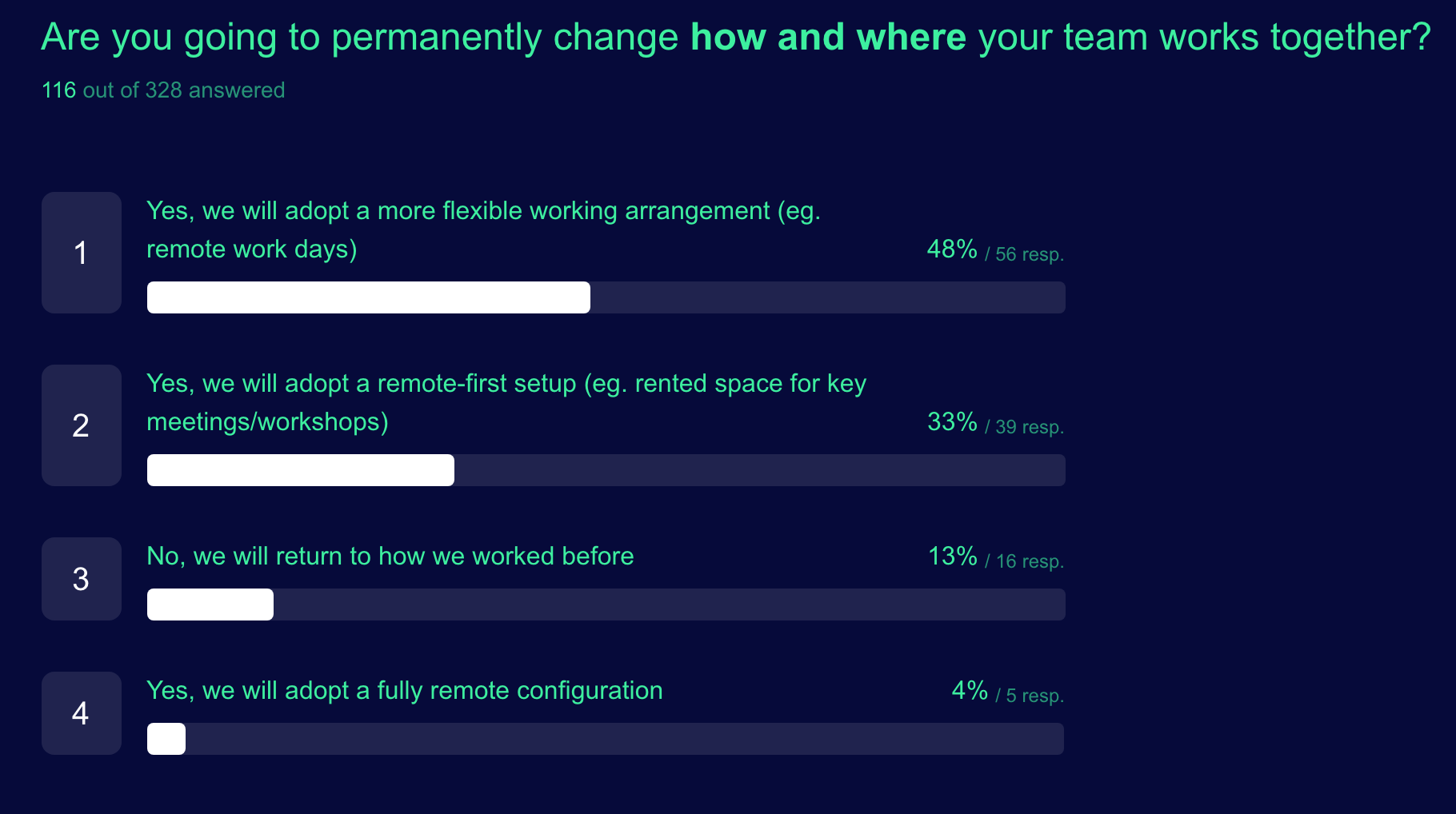 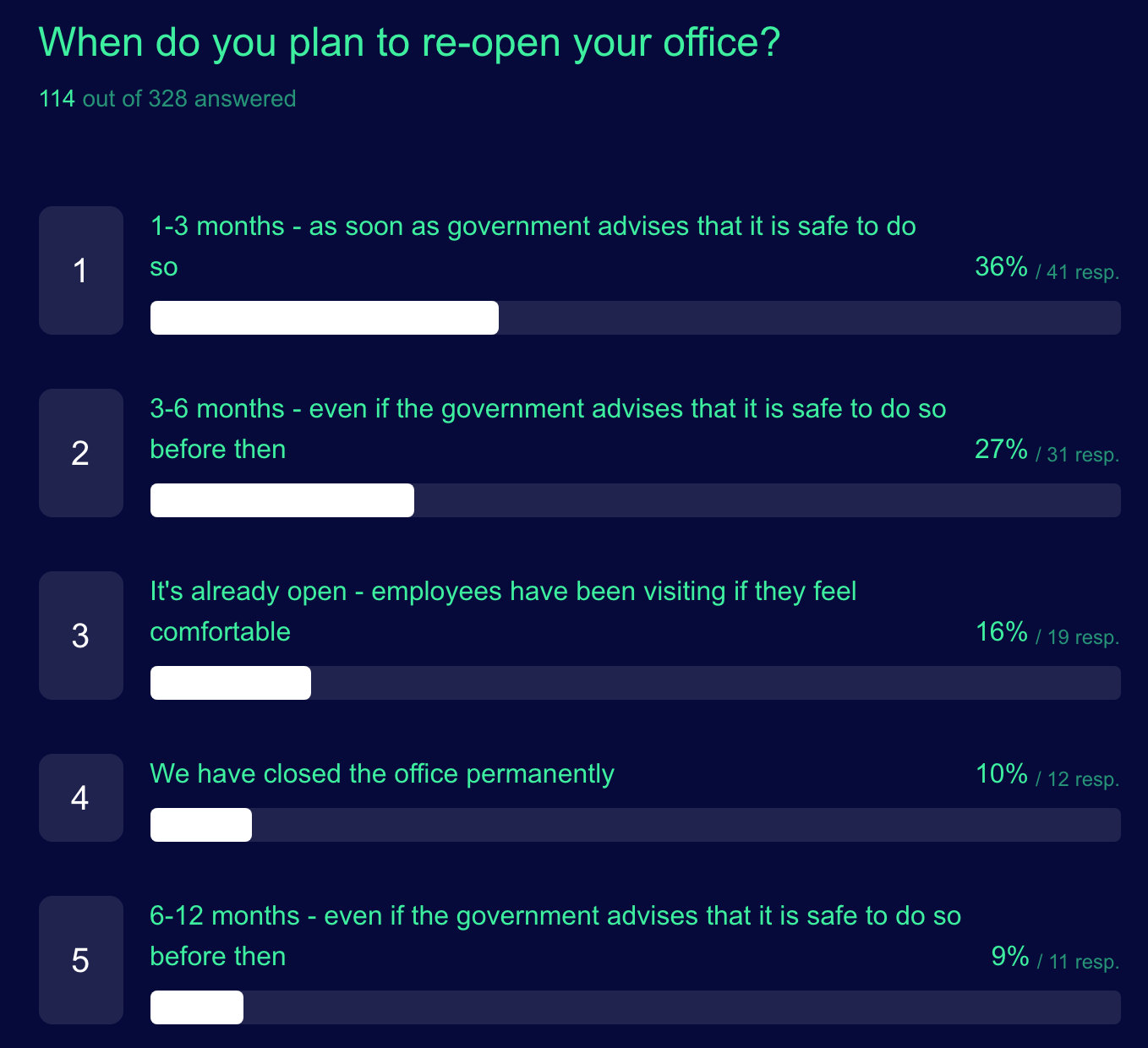 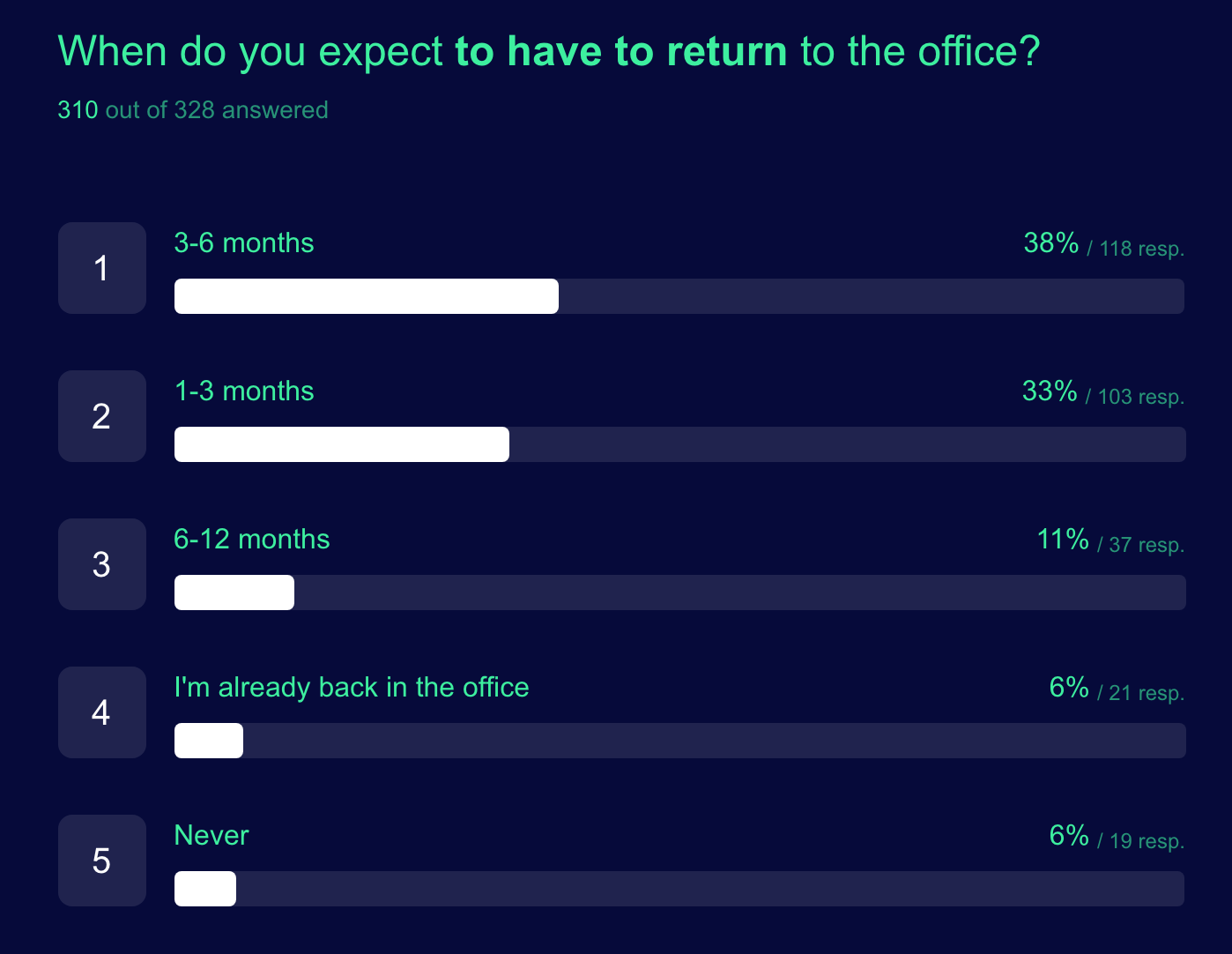 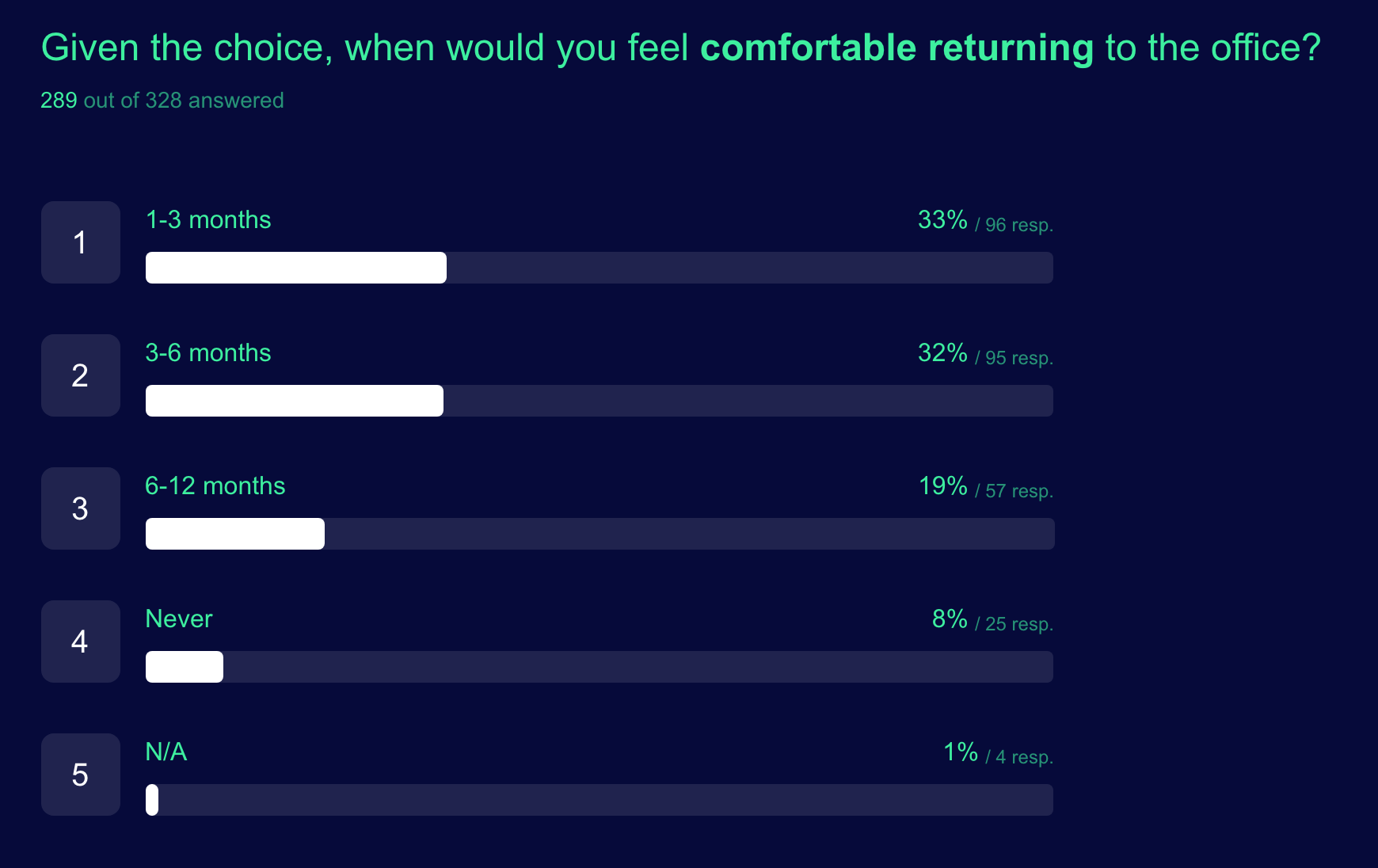 Given a full choice in the matter, 81% of those surveyed said they would prefer a hybrid of office and remote work, with only 11% wanting to go remote full time and 8% returning to an office full time. And 83% wanted to have set days when the whole team is in the office together.

Commenting on why they thought re-opening an office — in some form — was business-critical, comments from respondents included:

• “Ability to support early-career employees and bring on new ones”

• “I believe either fully remote or fully in-person setups are effective. A halfway house is ineffective.”

• “Too difficult to achieve the cross-pollination and high-velocity communication needed at our early stage.”

• “Culture. Younger team members can’t work from home all the time (shared accommodation). Some parents need the office to focus.”

• “We do order fulfillment from our warehouse.” 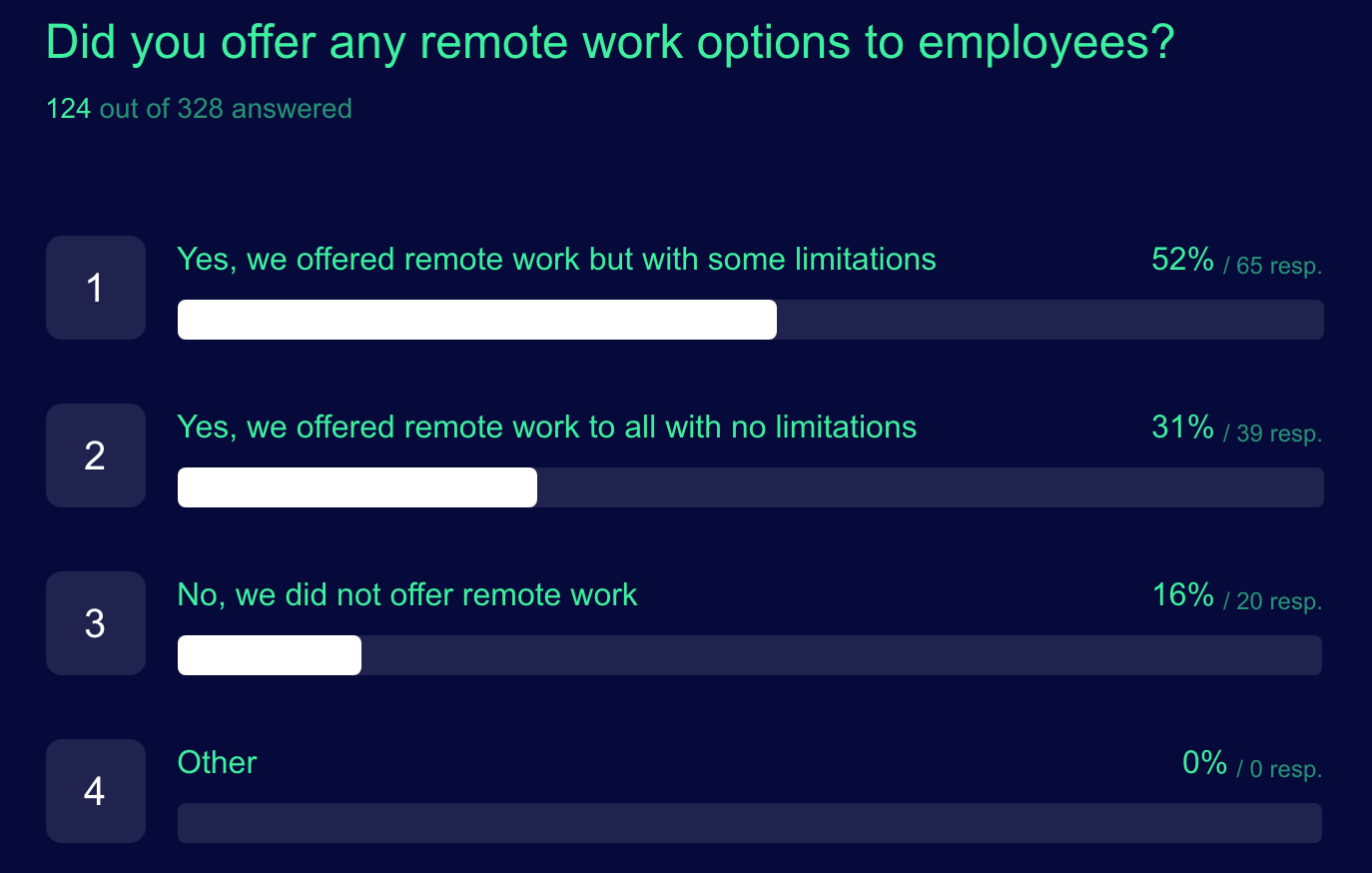 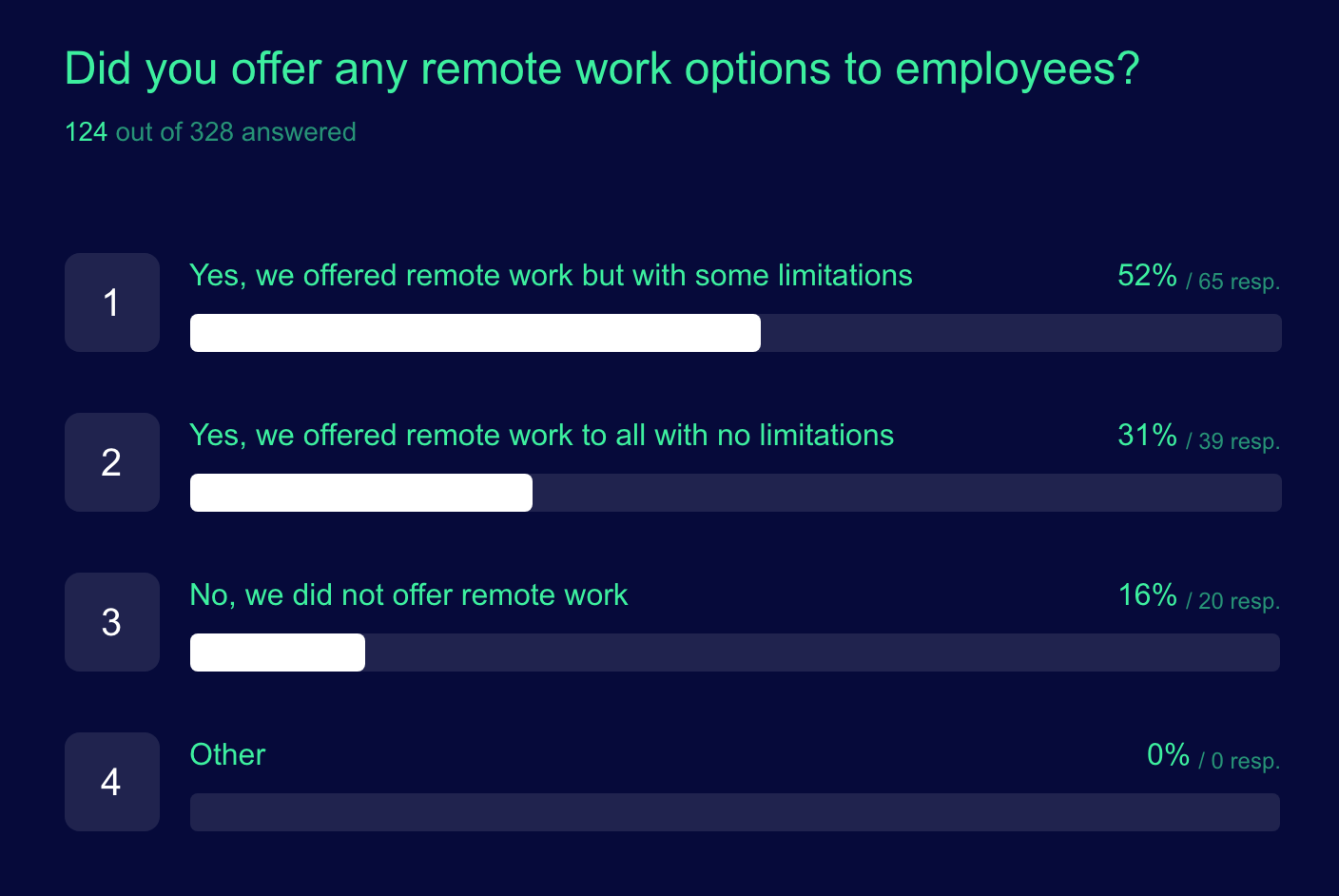 Office spaces still adapting
There were mixed results when startups were asked if they had renegotiated their lease as a result of COVID-19, with 16% of those on a short lease saying they had and were successful, but 16% saying they had, but had not been able to renegotiate. Some 14% on a long lease were successful in the renegotiation, 14% said they were still in negotiation and 11% had canceled the membership of their co-working space. 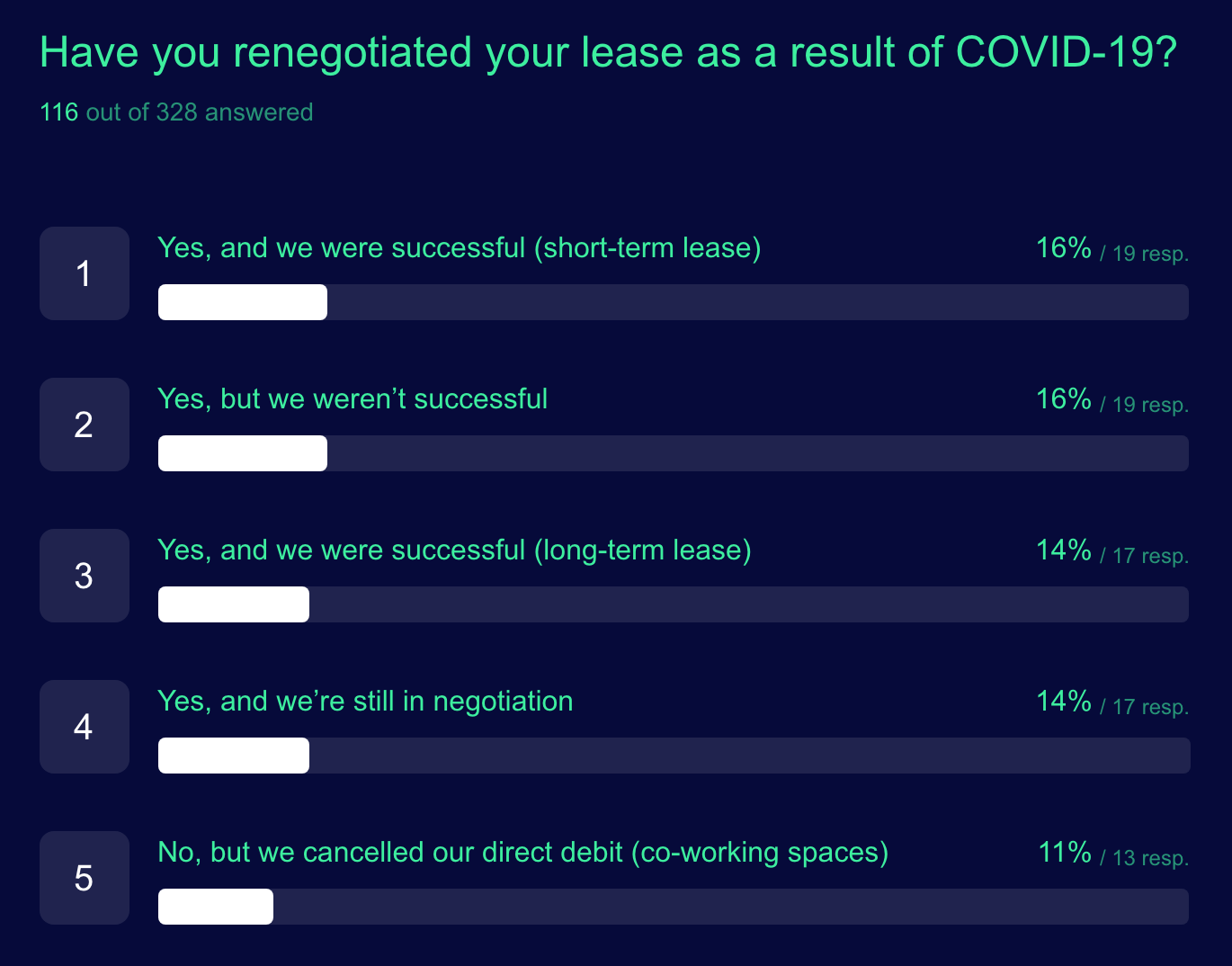 Some 41% of startups or their landlords had not performed a workplace risk assessment, 25% had, while 33% still planned to.

Offices appear to be responding well, with either 40% having already introduced measures to improve the safety of workplaces or 34% planning to, while 25% had not, probably because they do not have an office or use co-working spaces.

Most people (58%) said they felt the work they perform remotely is “trusted and respected equally to the work I perform in the workplace.” Most (50%) said their home setup was “OK, but not ideal.”

• “Saying hello and prioritizing chit chat on video calls every time, even though we all have work to do, observing social graciousness remotely is even more important. “

• “Being able to step away and recharge through engaging with the family when needed during the day.”

Mental health impact
Almost 80% said there had been no significant change to their mental health as a result of working remotely during COVID-19, with a slim number experiencing either a negative impact or positive. 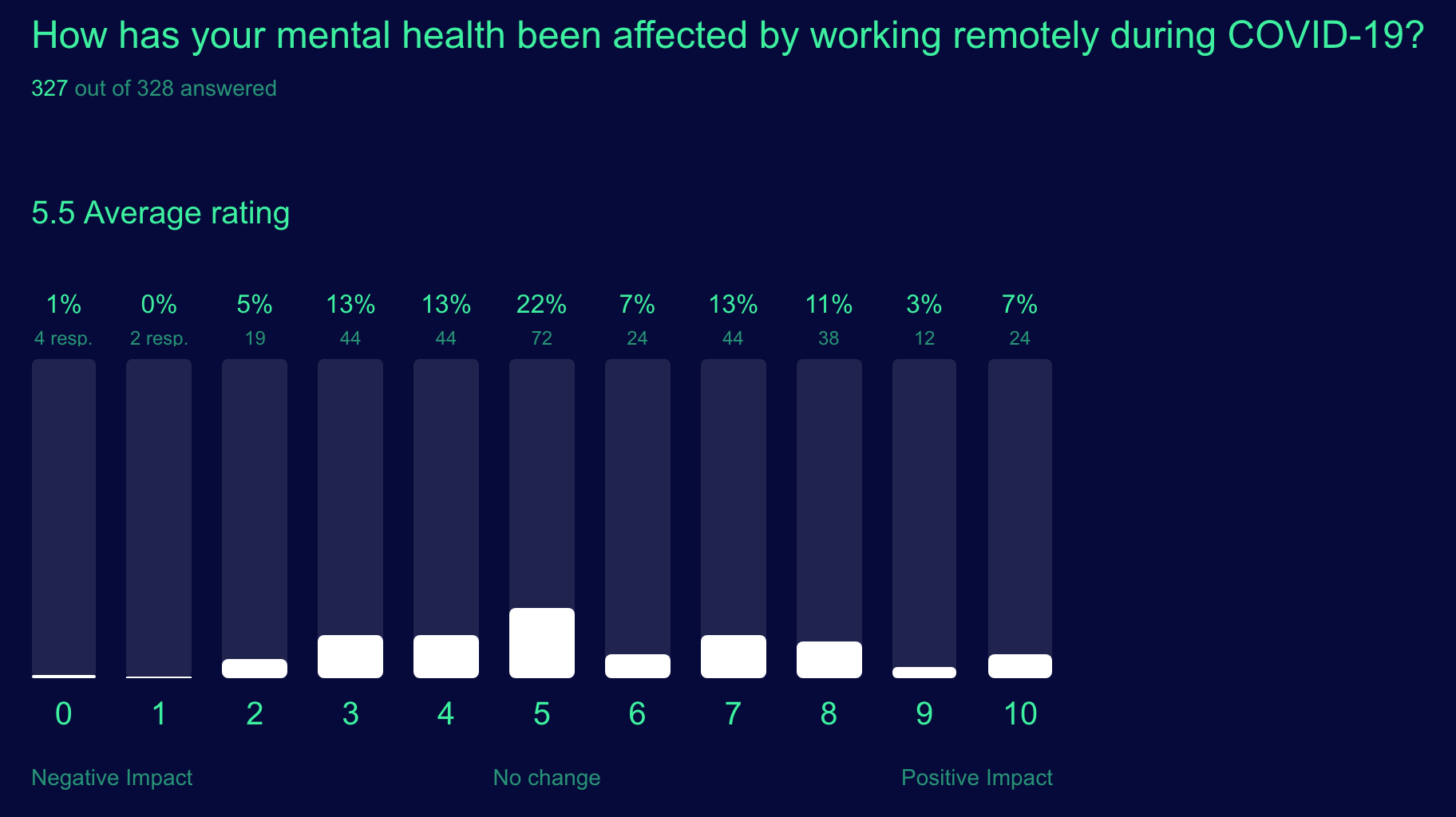