Finland-based Swappie has closed a €35.8 million ($40.6M) Series B to expand into new markets in Europe. The ecommerce business refurbishes and resells used iPhones, taking care of the entire process from testing and repairing used handsets, to selling the refurbished devices via its own marketplace, with a 12-month warranty.

Local VC and private equity firm TESI is a new investor in the Series B, along with Lifeline Ventures, Reaktor Ventures and Inventure Investors, all of whom participated in Swappie’s 2019 Series A. The total raised to date since the business was founded in 2016 is $48M.

Right now Swappie operates in Finland, Sweden, Denmark and Italy. The new financing will be used to expand across Europe, beginning with launches in Germany, Ireland, Portugal and the Netherlands this summer.

It’s also eyeing expansion beyond Europe — so will be speccing out a broader roadmap for the future.

“The main focus of this round is to become the number one player in Europe. But also to explore opportunities outside Europe as well,” says CEO and co-founder Sami Marttinen. “That’s something we will be looking into but no concrete plans to announce at this point.

“There are still opportunities for our business model everywhere in the world. So it’s a matter of just building the roadmap — where to go next.” Swappie touts growing consumer demand in the region to buy refurbished phones, saying that from 2018 to 2019 revenues grew 4x, hitting $35M+ in net revenue in 2019. It’s also seeing demand continuing to grow this year — recording a 5x increase in net revenue growth in April and May 2020 vs the same period last year, despite the ongoing COVID-19 pandemic. Indeed, the trend of consumers shifting to buying more online looks to be a help for its online marketplace.

Commenting on Swappie’s Series B in a statement, Tony Nysten, Investment Manager at TESI, said: “We believe there is a huge growth opportunity for Swappie. The smartphone market in Europe is worth over €100BN but used or refurbished phones currently make up just over 10% of that and only one in four pre-owned phones are currently re-sold. Through its rapid growth to date, Swappie has proven its ability to not just grow market share within the refurbished market, but to expand the size of the category overall. The business has enormous potential.”

Swappie’s early choice of market focus included not only familiar turf in the Nordics — but Italy, in Southern Europe. The latter was chosen deliberately on account of it being a tough market for ecommerce, per Marttinen.

“In the really early days the reason why we went to Italy was because it was one of the toughest ecommerce markets in Europe — they have a really low ecommerce maturity index. It’s very different in terms of shopping behavior. You need to build another level of trust in that market. There are lots of unique traits like cash on delivery, things like that. So we knew that in order to really conquer the market globally — and to be able to deliver on our global ambitions we would need to enter as difficult markets as early in our journey as possible.

“These days we have a much more advanced playbook and market studies across Europe.”

Swappie describes itself as a ‘scale-up’ tech business on account of addressing the whole value chain, per Marttinen.

“We’ve done a lot there on the hardware side — when it comes to actually refurbishing the devices we can make them even stronger then the original devices in many cases. So that means we can go as deep as onto the motherboard level in the repairs. Then on the software side, of course, we’re making selling and distribution and everything else scalable. Making sure that the checking processes and all the processes in the factory are according to the latest standards,” he says.

“Because of being so focused in also building the processes and focusing on the quality so much, so actually we have been able to truly change the way people consume electronics,” he adds. “If you think about it from a local player perspective they are typically mostly competing for the people who are already buying used devices — whereas we are able to deliver on this market by having full control of the entire value chain, from buying to refurbishing, to selling the phones to consumers.

“Most of our customers are buying used or refurbished devices for the first time — so actually our biggest competitors are new smartphone retailers.”

The most popular iPhone model sold on Swappie’s marketplace last year was the iPhone 8, per Marttinen.

He won’t disclosed the exact number of iPhones Swappie has refurbished and sold at this point but he says it’s a six-figure number — aka ‘hundreds of thousands’.

The team chose to focus on iPhones to ensure they can deliver the highest quality device refurbishment, he says, while also benefiting from the relatively higher cost of Apple’s smartphone hardware vs Android devices. Though he doesn’t rule out expanding to offer another type of refurbished smartphone in future.

“The business is now growing really rapidly but what we noticed in the early days is that the new device prices had started to rise before we started this business so we have been very lucky with the timing,” he tells TechCrunch, noting that Swappie also benefitted from the plateauing into advancements between handset models in recent years, as the technology matured.

“If you can build trust into this business, and make sure that the phones function as well as new devices — and that you’re actually making the buying process as well as safe as buying a new phone — that way you can actually accelerate the growth of the market. So that’s what we have been really successful in. It’s kind of the key to being able to grow so quickly.”

“One main point there has been that because we refurbish every device ourselves in our own factory in Finland we can deliver to customers the highest quality devices under warranty for much less than the cost of a new phone and also be more environmentally friendly,” he adds.

While, in years past, there have been instances of iPhone users’ devices bricked after a repair by an unauthorized repair shop Marttinen says Swappie is using only original iPhone parts so has avoided such problems.

He also points to recent European Commission proposals for a pan-EU ‘right to repair’ for electronics which suggests device makers selling in the region will be required to respect repairability, rather than using software updates as a way to penalize consumers who seek to extend the lifespan of their current device. 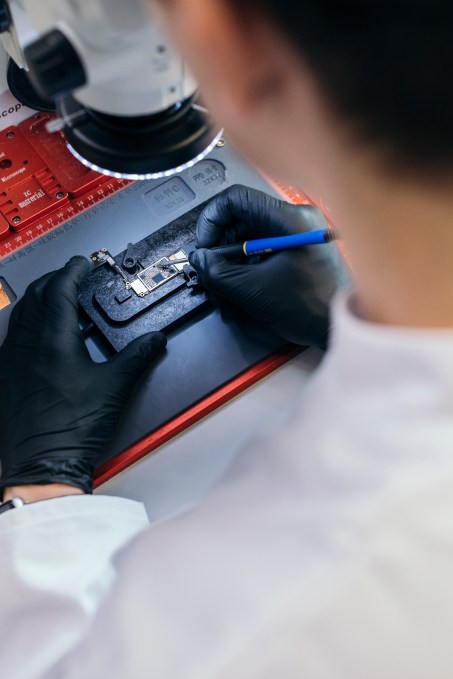 Swappie’s business also slots into a wider Commission mission to transition the EU to a circular economy, as part of the green deal announced by current president, Ursula von der Leyen — so it’s skating to where the puck is headed, if you like.

“It’s really good for the environment that the right to repair legislation has come forward in the past few years. That’s one very important point for us as well which was one of the reasons why we wanted to built microscope level repairs in our factories — so we wouldn’t have to scrap as many phones as you normally would,” Marttinen adds.

What can’t it repair? The proportion of iPhones which turn out to be truly unsalvageable via its processes is “extremely small“, he says. “We can actually do any repairs that are possible to do the phones so, basically, water damaged phones which have been at the bottom of the ocean — those are of course unrepairable. Or if the phone is bent too much or if the motherboard is completely ruined. But basically all the other faults we can repair.”

On the competitive front, he says Swappie’s main rival are retailers selling new iPhones — given it’s trying to woo iOS users away from buying a brand new iPhone. On the secondhand marketplace front Marttinen mentions reBuy as one of the main rival players in refurbishing and reselling electronics, though it does not focus on iPhones — offering a full range of devices, from wearables to smartphones and tablets, laptops, consoles and cameras.