ChatableApps is launching its hearing assistance app on iOS today, with a wider Android release to follow shortly. Backed by Mark Cuban, and based on the work of auditory neural signal processing researcher Dr. Andy Simpson, the app removes background noise in near real-time so that one-to-one conversations can be heard more clearly.

And, unlike other solutions on the market, its makers say it works with any modern smartphone and standard earbuds. Early “pre-clinical” trials of the Chatable app claim to demonstrate that it matches or even surpasses the performance of some traditional hearing aids, with 86% of participants reporting that the ChatableApps’ “universal hearing aid” was better for conversation than their existing hearing aid. 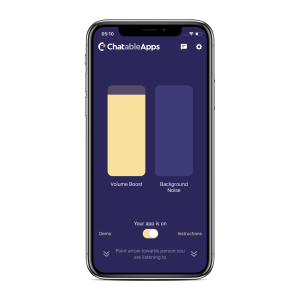 When I covered the startup’s recent funding round, ChatableApps co-founder Brendan O’Driscoll told me the company’s technology and approach is “completely unique” because it doesn’t use noise filtering or other DSP techniques. “It’s actually a deep learning neural net approach to speech and noise separation that doesn’t apply filters to the original audio but rather it listens and re-prints a brand new audio stream in near real-time which is a mimic of just the vocal components of the original audio,” he said.

Or, put simply, unlike traditional approaches to background noise removal — which attempt to label and remove unwanted sounds — ChatableApps’ AI, dubbed “VOXimity”, identifies the voice we want to hear, and creates a new, identical voice track which sounds (more or less) the same as the original but without any other background sounds. The technique is called end-to-end neural speech synthesis.

Meanwhile, ChatableApps CEO Giles Tongue, tells me the team has been racing to get the app released as quickly as possible, after realising it could help plug a gap for people unable to access a hearing clinic during the coronavirus crisis or unable to lipread due to the prevalence of face masks.

“Following successful pre-clinical trials, we have decided to launch immediately due to urgent demand from audiologists to help people struggling because of coronavirus,” he says. “With many unable to lipread due to face masks or unable to visit a hearing clinic in an emergency, our app provides a lifeline that will help people communicate”.

The app may also help manage social distancing. “You can place the phone next to the person talking, put in your Bluetooth buds, walk ten feet away and still be able to hear someone with perfect clarity,” adds Tongue.

Since we last covered the company, the team has also re-visited the ChatableApps pricing model. Previously the startup planned to offer a paid subscription version only, but now has a free, albeit somewhat limited, tier.

“The app is free to access, with the option to subscribe to unlock maximum voice amplification and reduction of background noise,” says the company. The full version is available for £9.99 ($12.99) per month, or £59.99 ($79.99) per year when paid annually.